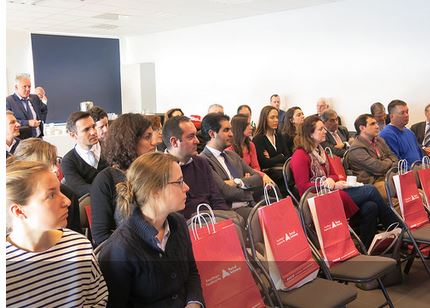 A view from one of the conference sessions

Last week’s inaugural European Shipping Week (ESW) has been heralded a massive success with the cream of shipping’s decision-makers rubbing shoulders and networking with officials from the European Commission, European Parliament and EU member states at over 40 industry events held throughout the week.

Just short of 1 million tweets about ESW were sent in the five days to Friday March 6th with 3.2m page impressions recorded, making ESW the talk of the town in the global shipping industry. Ex-Belgian Prime Minister Guy Verhofstadt used his speech to describe ESW as the largest shipping event ever held in Brussels.

Many events were over-subscribed with in excess of 300 people attending the opening ESW reception and over 400 top level players attending the flagship ESW Conference and Gala Dinner which was held at the 5 Star Le Plaza Hotel in downtown Brussels.

ESW promoted the strengths and significance of European and global shipping with active participation by the major European legislators including the European Commissioner for Transport Violeta Bulc, Rainer Wieland, Vice President of the European Parliament, João Aguiar Machado, Director General DG MOVE, Fotis Karamitsos, Acting Deputy Director General, DG MOVE and many others.
Visitors to Brussels attended several industry events where crucial issues such as migrants; vessels of the future; maritime policy and funding; harmonisation in the international regulation of shipping alliances; LNG for Shipping; and Tramp Shipping to name but a few, were discussed and debated at the highest level.

Over 25 members of the press also covered the week-long event with coverage being picked up around the world.

Patrick Verhoeven, Secretary General of ECSA said: “European Shipping Week was an undisputed success, as evidenced by the large number of participants. It met the need for a large scale shipping event in Brussels and we can now safely assume that the European Shipping Week will, from now on, be considered as a reference point for the shipping industry and EU regulators.

“I would like to thank all the partners and supporting organisations, our media partners, the speakers and participants as well as Shipping Innovation for contributing to the successful completion of ESW.”
For further information please visit: www.europeanshippingweek.com