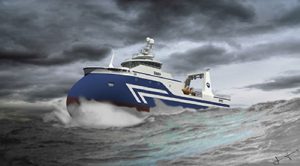 In connection with the recent announcement of the construction of three wetfish trawlers for HB Grandi, the Icelandic fishing concern, MAN Diesel & Turbo has announced that the newbuildings’ MAN main engines will also feature its SCR (Selective Catalytic Reduction) system. The company states that the system will enable the trawlers’ IMO Tier II-compliant engines to fulfil the strict IMO Tier III NOx emission requirements.

Vilhjalmur Vilhjalmsson, CEO of HB Grandi said: “When we decided to renew our fresh-fish fleet, we immediately focused on the task of curtailing the ships’ power requirements, both in terms of the propulsion plant as well as electricity production, so as to make the exhaust gas as clean as possible.”

Vilhjalmsson added that HB Grandi deliberately pursues a green company profile and that its focus on clean and responsible fishing ultimately led to MAN technology being chosen for the trawlers. As such, HB Grandi’s profile suited the minimal environmental footprint from operations, including the cleaner exhaust gasses and NOx reduction that the MAN package offers. A further advantage of choosing MAN was the relatively straightforward integration of engine, propeller, propulsion controls and SCR system that equipment from the same manufacturer entails.

MAN Diesel & Turbo reports that special attention was given to selecting the optimal position for the SCR system aboard the trawler. This challenge was met and solved in great part through good cooperation with Nautic, the Icelandic specialist designer and ship consultant, at an early stage of the project.

Nautic – based in Reykjavík – is designing the new vessels, which will replace three wetfish trawlers currently in service. The vessels, with their distinctive bows, will be built in Turkey by Celiktrans Deniz Ltd. Sti. with delivery scheduled for May 2016, late-2016 and spring 2017, respectively.

The new HB Grandi wetfish trawlers will enjoy the benefit of several features to optimise operation. These include employing a floating-frequency concept that increases their flexibility and economical part-load pattern with an up to 17% lower engine/propeller speed and a commensurately lower fuel consumption.

SCR is the most tested and approved system for achieving NOx reduction rates up of to 90%. SCR involves the injection of ammonia or urea, into the diesel engine’s exhaust stream. The urea decomposes into ammonia and carbon dioxide, with the ammonia subsequently reacting with NOx and oxygen in the presence of a catalyst, transforming into the ecologically-benign constituents of water and nitrogen.

In order to optimise the SCR process at part load, the engine is specified with a turbocharger bypass as part of the exhaust gas temperature system that ensures sufficiently high temperatures.

MAN Diesel & Turbo’s SCR system is available in fourteen different sizes, in this way fully covering its entire portfolio of medium-speed engines. The system has been devised as a modular kit of components for reasons of simplicity and to minimise costs.

A special feature of the system is its communication with the engine control system that optimises the temperature for the SCR system at individual load- points.

A further special feature of the system is its continuous NOx-emission control that saves urea and avoids ammonia slip.

The main components of the MAN Diesel & Turbo SCR system are:

About MAN Diesel & Turbo
MAN Diesel & Turbo SE, based in Augsburg, Germany, is the world’s leading provider of large-bore diesel engines and turbomachinery for marine and stationary applications. It designs two-stroke and four-stroke engines that are manufactured both by the company and by its licensees. The engines have power outputs ranging from 450 kW to 87 MW. MAN Diesel & Turbo also designs and manufactures gas turbines of up to 50 MW, steam turbines of up to 150 MW and compressors with volume flows of up to 1.5 million m³/h and pressures of up to 1, 000 bar. The product range is rounded off by turbochargers, propellers, gas engines and chemical reactors. MAN Diesel & Turbo’s range of goods includes complete marine propulsion systems, turbomachinery units for the oil & gas as well as the process industries and complete power plant solutions. Customers receive worldwide after-sales services marketed under the MAN PrimeServ brand. The company employs around 14, 500 staff at more than 100 international sites, primarily in Germany, Denmark, France, Switzerland, the Czech Republic, India and China. MAN Diesel & Turbo is a company in the Power Engineering business area of MAN SE.