Human Rights at Sea (HRAS) and The Mission to Seafarers (MtS) have today issued a global plea for urgent action for the crew of the detained vessel the MV Seaman Guard Ohio.

The 6 men, all former soldiers from the UK – John Armstrong, Nick Dunn, Billy Irving, Nick Simpson, Ray Tindall and Paul Towers – all remain in India 509 days after their initial arrest, even though they were found innocent by Justice Prakash in the Madras High Court on 10 July 2014, more than 8 months ago.

Human rights barrister and founder of HRAS David Hammond said:“Human Rights at Sea has been closely following the Seaman Guard Ohio case and has drafted a detailed study, with co-ordination with the UK families, UK crew and engaged welfare organisations, highlighting the case facts and human rights issues which have emerged over the last 17 months of the crew’s detention in India.

Human Rights at Sea remains very concerned at some of the constabulary and judicial actions in the handling of the case, and of the continued detaining of the crew following charges being quashed by the Madras High Court on 10 July 2014. Human Rights at Sea urges the Indian authorities to bring this case to a swift conclusion in line with Indian law and applicable intentional Human Rights conventions and for the crew to be repatriated to respective home States without delay.”

Director of Justice and Public Affairs The Revd Canon Ken Peters, with The Mission to Seafarers global maritime welfare charity, said: “The Mission to Seafarers has been working with families in the UK, as well as representatives of the families of the other crew members 14 from Estonia and 12 Indians on this harrowing case since it began in October 2013.  The crew have been held for over 500 days, firstly in prison in very harsh conditions, then on bail, and now just waiting for their passports to be returned to get home. They have long since had the charges against them completely quashed and they need to get back to their anxious families. 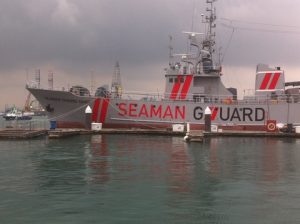 I most humbly appeal directly to the British Prime Minister Mr David Cameron, our Foreign Secretary Mr Philip Hammond and to Indian Prime Minister Mr Narendra Modi to look into this case immediately and take steps for the Indian legal process to be expedited without any further delay. Human Rights at Sea have provided a welcome case study which indicates that the men are being unlawfully detained and we maintain that they must be allowed to return home to their loved ones with all speed.”