Central bankers of the world might go green with envy if they were to watch artist Justine Smith at work. In her London studio, Justine calmly surveys the state of global money supply and at will trims the almighty dollar, at least in its printed form.

Most people would shudder at the act of carving up sheets of crisp dollar notes, as Justine does, to her own designs. Wielding artist’s scissors, Justine scythes sensitively into the greenbacks to fashion alluring sculptures including designs with ferns and other foliage.

Nor is it simply the dollar that is at her mercy. She has worked her transformations on most of the other currencies, both those recently rendered obsolete and those that are in circulation. The results are collages, sculptures, and prints of maps that speak of much more than geography. They expose the bones of a money system that is supposed to make the world go round, but that often puts a spoke in relationships of all kinds.

Justine Smith reminds us that the form of the money we handle as a matter of course for everyday purchases, for investing and for luxury indulgence, at the same time is a pervasive platform for the commemoration of historic leaders, acknowledgement of sovereigns and national presidents, the vanity of living politicians, and a record of flora and fauna prized by the inhabitants of the respective countries.

We the People of the Commonwealth, 2014. Copyright Justine Smith 2015. www.justinesmith.net

Money impinges on almost every aspect of our lives, says Justine. It is a conduit of power and value systems. Banknotes are pieces of paper that symbolise more than a “promise to pay” – they are repositories of political, moral and social facets of society.”In the notes, one views culture, history and many clues to the way of life of each country – that is part of the fascination for me, ” she says.

Thus her raw materials are tokens that are often from the off masterpieces of design, and which she patterns into making new statements.

Justine has been a practising artist for 20 years. She has been map-making with banknotes for the last 10, but paper as a material has been a constant. An early work was a sculpture of a dog, covered in cut-outs from the children’s comic The Beano.  To one of the next dog sculptures, she applied dollar bills and called the result Lucre.

One of the next works was based on notes that were about to go out of circulation ahead of countries adopting the Euro (Gordon Brown when Prime Minister chose the image Euro from the UK Government Art Collection as one of the works of art for his residency in Downing Street), and then came cut paper pieces for the furniture and lifestyle Conran Shop.

Justine’s maps are based on original collages which are turned into prints and hand-cut.  She gained considerable attention for her maps based on the scrapping by the UK of much City regulation – A Big Bang –followed by others reflecting the impact of the financial crash: A Bigger Bang White and A Bigger Bang Black which showed major currencies blasted to pieces. 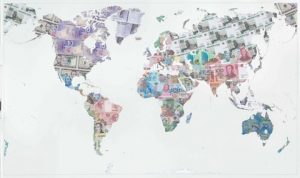 Her first Money Map of the World was the real starting point of that series. It took seven months to create and comprised banknotes collaged to denote the outline of every state – including those not recognised by the United Nations – that has its own currency. It was sometimes difficult to get her hands on the notes that were needed, because several countries have restrictions on currency export.

Then there was the project entitled We the People of the Commonwealth. This comprises shards of notes of member states of the Commonwealth of Nations (once known as the British Commonwealth), notes that are indented in such a way that they edge a blank centrepiece delineating the contours of the British Isles. “Money coming in, and money going out, ” is how Justine sees it, and with the Commonwealth containing some 2.3bn people, almost a third of the world’s population, there is plenty of money about – total gross domestic product of Commonwealth components is $13.6trn. 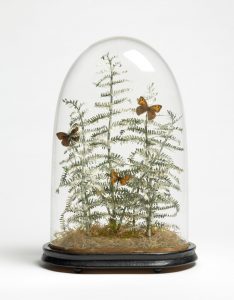 Justine’s Commonwealth composition required the selection and meticulous cropping of bank notes from 52 economies: all the nations apart from Fiji, which was suspended at the time from the Commonwealth because of the behaviour of its military regime. Fiji was reinstated fully in September 2014, when a democratically elected government took office.

Commonwealth is a kaleidoscope of currency lettering and faces, including “images you do not usually relate to the UK; it is all part of the cultural mix, ” says Justine. Some of the faces are instantly recognisable anywhere in the world – Nelson Mandela, Mahatma Ghandi and the Queen. Less familiar these days is for instance national hero Samora Machel of Mozambique who led his country from Independence in 1975 until his death in a plane crash in 1986. “Is it really a Commonwealth?” is the question posed, says Justine. “Is it Britain holding on to the old power of empire, or trying to imagine it still has that power somehow?”

She embarked on a new global map in 2012-13, which took 10 months to complete, “because the world had changed, with a new country coming into being – Sudan dividing into South Sudan and the Republic of the Sudan, each with its own currency, but sharing some of the same imagery on their banknotes.” Many other means of exchange had been renewed by monetary authorities. The result was Money Map of the World 2013, in inkjet with pearlised screen printing, in an edition of 90, plus a hand-finished edition of 10 with spot glazing, and gold and silver leaf.

Time is Money is a map based on the international time zones, with pieces of banknotes from every country. A print of the work was acquired by the national collection at the British Library.

All notes have to be in mint condition for her work, and Justine buys them from specialist dealers, which means they usually cost above face value.  The process entails much planning and research: “I want to make sure I have the right banknotes for the work.”

Of late her theme of “natural capital” has come to the fore. In this, banknotes become botanical: sculptures of flowering plants and weeds, from delicate snowdrops to large tree installations, with images evident of dictators, as their actions influence substantially the value and usage of money.

Suitably, Justine has green notes with which to work in this ecological branch of her oeuvre. The old £1 note (remember them? – they were withdrawn by the Bank of England in March 1988) was green, as are dollar bills, which use green ink on the back, no matter what the denomination, which is the origin to the term ‘greenback.’ Going back nearly 90 years, the US chose green because of its resistance to chemical and physical changes, and as a colour psychologically identified with strong and stable credit. US currency ‘paper’ is in fact 75% cotton and 25% linen, giving it a distinct look and feel.

For a touring exhibition named The Forest of Possibility she crafted dollars into ferns, and included pristine pound notes and real dandelion clocks.

Following an earlier fabric design called Belmont Ivy (ivy and ladybirds) commissioned by Liberty for use by that label and Nike, and in addition used on Vans trainer shoes, she turned her hand to digitally printed wallpaper. Inspired by the ivy she saw growing on an abandoned churchyard wall near her studio south of the Thames, she produced a design she calls Copperfield Ivy. This she first made as a sculpture using fragments of £1 notes, photographed and worked digitally into the design, along with images of real moths. As a late flowering plant, ivy is a habitat for moths, as a source of food and a safe place to lay eggs.

Without a shred of doubt, Justine will never be short of her prime material. For instance, the US Treasury Department’s Bureau of Engraving and Printing continues to churn out paper money in Washington DC and in Fort Worth, Texas. Many federal legislators want to scrap one-dollar notes in favour of coins, but although this might yield billions of dollars of efficiency savings, the public is steadfastly against it. People retain their faith in the paper likeness of George Washington that was introduced in 1929, and there is an estimated $10bn worth of single dollar bills in circulation.

She is showing her work with TAG Fine Arts in March 2015 at the Affordable Art Fairs in London’s Battersea Park, and New York; and the announcement of further commitments is imminent.