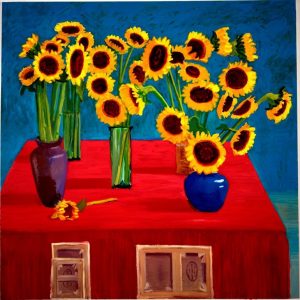 Energy and refining make for a potent combination when headily mixed with contemporary art. Russian businessman Leonid Mikhelson, who has a stake in Novatek, his country’s largest independent producer of natural gas, is owner and president of V-A-C Foundation, a not-for-profit institution which “focuses on contemporary art and cultural practice and aims to provide a platform for creativity.”

London’s Whitechapel Gallery has been inviting British artists to select works drawn from the V-A-C collection, and the latest to do so is London-based Lynette Yiadom-Boakye, a Turner Prize-nominated painter.

Ms Yiadom-Boakye has chosen a dozen works – including examples by Doig, Hockney and Warhol – with the theme of nature, echoing the awakening (just) of spring in London in 2015. Her selection is the third in a series of four V-A-C displays at the Whitechapel Gallery.

One of the richest men in Russia, Mr Mikhelson dedicated his art foundation with the title meaning ‘Victoria, the Art of being Contemporary, ’ to his daughter Victoria, who is in her 20s. V-A-C was founded in Moscow in 2009 by Mr Mikhelson as owner and president and Teresa Iaricci Mavica, an Italian who has been involved at high level in the Russian art scene since 2003, as director. The foundation is “deeply committed to supporting contemporary art in Russia as well as the new generations of artists from around the world, ” said a statement from the Whitechapel. 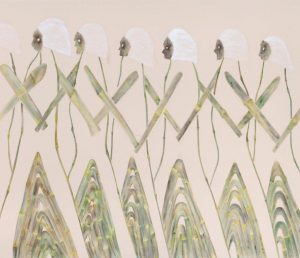 Rite of Spring. By Enrico David. Acrylic and conté crayon on canvas. 2012. Courtesy the artist.

In a $27bn project, Novatek is with minority partners Total and China National Petroleum Corp seeking from 2017 to extract and liquefy gas from the huge Yuzhno-Tambeyskoye field on the Yamal peninsula in the Arctic. CNPC and state-controlled Gazprom will be the main customers.

Mr Mikhelson’s other interests include a substantial stake in the petrochemical producer Sibur Holding and the largest shareholding of First United Bank of Samara.

Among her Whitechapel choices, under the overall title Natures, Natural and Unnatural,   Ms Yiadom-Boakye has lit on David Hockney’s 30 Sunflowers (1996), a richly coloured, still life of flowers in vases, and one stem forlornly resting, on a red table.  Los Angeles-based Piero Golia has woven in cotton a 2007 work with striking forestry perspective: Untitled blanket Yosemite National Park.

A poignant backdrop is a 4 minute video by Estonian artist Jan Toomik. It is called Dancing with Dad and shows the artist dancing on a summer day in a woodland where his father was buried, making up for the fact that the artist never had the opportunity to dance with his father when he was alive.

Black and white gelatin prints of photographs from 1980 to 1993 by Nikolay Bakharev show rather gaunt men, women and children resting in forests, far from city pressures.

A brightly coloured screen-print of a cow by Andy Warhol is another selection.

Ms Yiadom-Boakye said: “The title of the display refers to the idea of nature, and the different types of nature – the nature you walk out into in the wilderness, nature that you bring into the house, human nature, people interacting with nature and also the nature within a person.”

She has been widely praised for her depictions of people with sharply realistic aura, but conjured from her imagination.

The V-A-C exhibition is part of the Whitechapel Gallery’s programme, supported by insurer Hiscox, of increasing access to rarely-seen collections from overseas.

Lynette Yiadom-Boakye Selects from the V-A-C Collection, is at Gallery 7 of the Whitechapel Gallery, London E, until June 14 2015. Entry is free.