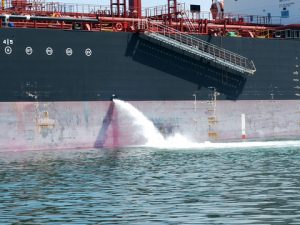 All stakeholders involved in the testing, approval, fitting and operation of ballast water management systems (BWMS) are being invited to complete online surveys, as a part of an International Maritime Organization (IMO) study to assess the implementation of the BWMS approval guidelines and the performance of type-approved systems.
The study aims to provide a comprehensive review of the technical standards and approval testing procedures in the Guidelines for approval of ballast water management systems (G8), initiated by IMO’s Marine Environment Protection Committee (MEPC) at its 67th session in October 2014. The intention is to address concerns that the testing regime for approval of BWMS needs to be sufficiently robust and consistent, so that approved systems will meet the standards set out in the International Convention for the Control and Management of Ships’ Ballast Water and Sediments, 2004 (BWM Convention).
The surveys can be accessed at sites.google.com/a/wmu.se/d2study/​ and will remain open until 1 June 2015. The following are invited to participate: Administrations and associated agencies; test facilities, organizations and independent experts; BWMS developers, manufacturers and vendors; classification societies; ship owners and operators; flag State and port State control inspectors; and other relevant experts, consultants or organizations.
The study is being carried out by the IMO Secretariat in partnership with the World Maritime University (WMU) and its outcome will be reported to MEPC 69 in spring 2016.
The BWM Convention addresses the problem of aquatic organisms and pathogens being released into non-native environments after being transported around the world in ships’ ballast water. Such organisms may survive and out-compete native species, becoming invasive and causing a great deal of damage to the local ecosystem, resources, infrastructure, as well as potentially to human health. The BWM Convention requires the management of ballast water in order to prevent the transfer of such microorganisms or species.
The BWM Convention will enter into force 12 months after ratification by 30 States which collectively represent 35 per cent of world merchant shipping tonnage. The number of ratifying States (44) is already sufficient but, at 32.86 per cent, their collective share of world merchant shipping tonnage is not quite sufficient to trigger entry into force.
Note: The study on the implementation of the ballast water performance standard described in regulation D-2 of the BWM Convention is fact-based and will focus on collecting, synthesizing and analysing data and verifiable information and documentation. It involves two “tracks” to facilitate and optimize the collection of data: (1) similarities/differences in testing and certification; and (2) BWMS operational performance.
The two online surveys can be accessed at https://sites.google.com/a/wmu.se/d2study/. The surveys will remain open until 1 June 2015. Queries can be addressed to: d2study@wmu.se.
Further information can be found in Circular Letter No.3537​.