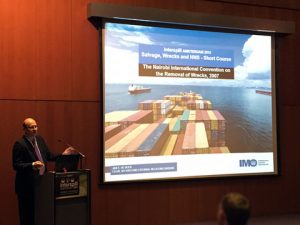 24/03/2015 IMO’s Jan De Boer has delivered a presentation on the Nairobi International Convention on the Removal of Wrecks at the Interspill 2015 conference in Amsterdam (23 March). The presentation formed part of a short course on Salvage, Wrecks and Hazardous and Noxious Substances (HNS), which examined the issues surrounding casualty response from a salvor’s viewpoint and addressed the challenge of hazardous and noxious substances (HNS) cargos. In particular, cost recovery under international legislation relevant to salvage, wreck removal and HNS was considered.

The Nairobi Convention was adopted at an IMO international conference held in Kenya in 2007 and is set to enter into force on 14 April 2015. The Convention will provide the legal basis for States to remove, or have removed, shipwrecks that may have the potential to affect adversely the safety of lives, goods and property at sea, as well as the marine environment.

The short course also included presentations by the salvage industry and IOPC Funds.