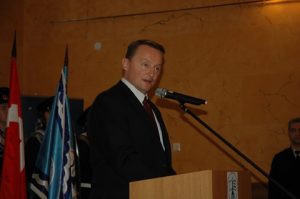 “We are very excited to continue to invest in Russia. These are big investments into the project as large shipments will go to Novorossiysk from the Far East, ” Tom Hyldelund said.

He explained that the company opens the new service to meet the demands of its clients.
“In general for Russia, it shows very strong commitment from our side to continue to invest”, he summarized.
The new service will link Japan (Yokohama, Nagoya), S.Korea (Busan), China (Shanghai, Ningbo, Yantian), Singapore (Singapore) and Russia (Novorossiysk).

The service deploys 14 vessels of Panamax and Post-Panamax class with the rated capacity of up to 5, 000 TEUs on a weekly basis.
Fixed berth window will be introduced for the direct call to NCSP terminal. Besides, there will be an available covered storage area for the inspection of refrigerated containers.