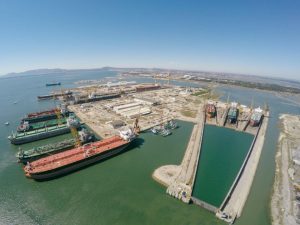 Latest aerial view of Lisnave, with 13 ships under repair and one at cleaning station. Photo by Vitor Gordo.

Activity at the major Portuguese repair complex Lisnave remained at stable levels during 2014, shareholders have been told at their general meeting at the Mitrena Shipyard.

Despite the volatile and adverse context of the international shipping market, Lisnave was facing up to the difficulties, successfully repairing 92 vessels from 21 countries, the shareholders heard.

The yard capitalised on repeat business, and ship operators from Singapore, Greece and Germany were among the leading customers. Noteworthy work was carried out for owners including Teekay Marine, AP Moller, Enterprises Shipping & Trading, and AET Shipmanagement.

Exporting 98% of its production and with a national incorporation of more than 90%, said management, Lisnave reached in 2014 a sales level of 85.67m Euros, resulting in a net profit of 6.47m Euros, slightly down on the previous year.

A sum of 1.2m Euros will be distributed as a “balance bonus” to workers, said the company.

Capable of handling the world’s largest ships, the Lisnave yard at Mitrena, near Setúbal, is a convenient service location for vessels trading in or passing through Atlantic and Mediterranean waters. The yard is 50km south of Lisbon.