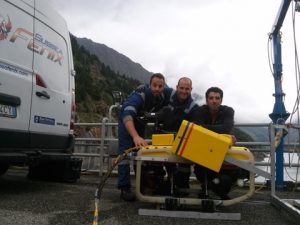 Subsea Fenix team with their ‘Grasshopper’ – the Falcon with the retractable system lowered.

A retractable sonar system has been specially designed by underwater engineering services company Subsea Fenix to set atop a Saab Seaeye Falcon ROV.

Nicknamed ‘The Grasshopper’ the concept has made possible a more detailed inspection of a reservoir dam in central Italy than could otherwise be achieved.

Faced with the problem of mounting a BlueView 3D Sonar system high enough above the ROV to gather all‐round images and avoid the vehicle’s chassis obstructing the scan, Subsea Fenix knew it would be impossible to swim any distance top‐loaded in this way.

Their inspired solution was to create a retractable structure that lowers the topside mass whilst the Falcon is swimming, then remotely raises it when needed.

With a full inspection package aboard the ROV it has been possible to provide accurate visual 2D and 3D sonar data of inlets and outlets, grids, tunnels and ramps ‐ whilst also identifying the presence of debris and sediment.

The clarity of both the high‐resolution cameras and advanced sonar has given the inspection team a clear and accurate view of the condition of the dam and its operational components.

The Falcon helped uncover critical problems such as rock fall damage to the rail used to lower the massive outflow closure gate, and rock debris blocking the cable wheels that lower the gate.

Scans also revealed that a third of the grids clearing the water flow were obstructed by sediment.

Divers were used for much of the remedial work with the Falcon in support. The 2D sonar aboard the ROV was used to view the underwater horizon and monitor diver activity, whilst at the same time observing crane movement of a dredging pump.

The Falcon’s intelligent control architecture makes it easy to add and change such systems as needed.

Although small enough to be manhandled, even from a small boat, its five powerful thrusters make the Falcon highly manoeuvrable and able to hold steady in moving water whilst filming or undertaking various missions.

Subsea Fenix’s future plans include using the Falcon at the same Lake for a deep tunnel inspection to an interconnected lake.

For offshore operators, a 4D geo-spatial data acquisition system with data visualisation in real-time is now available for the Seaeye Sabertooth AUV.

Its full capabilities were demonstrated to representatives of twelve companies from seven countries, together with the Danish Navy, in Saab’s exclusive underwater test centre at Lake Vättern, Sweden.

This advanced system has been configured for the Sabertooth by Saab QPS, a Saab Seaeye partner and leading developer of hydrographic survey and mapping software.

Operators get a complete hydrographic data acquisition, navigation and processing software package that is fully integrated into the Sabertooth.

The development unifies the QINSy and Fledermaus systems developed by Saab QPS into a single enhanced option for the Sabertooth.

QINSy is a data interface and acquisition software package that consolidates data acquired from different sensors in real-time. All acquired data can be viewed in various dedicated displays, which is ideal for real-time QA/QC of the data.

For the demonstration the Sabertooth was equipped with a high-end sensor suite including side scan sonar, sub bottom profilers, high frequency imaging sonar, multibeam echo sounder and cameras, along with GPS, DVL and inertial measurement unit (IMU) supporting the navigation. Processing of the trajectory data was achieved with an algorithm developed by Saab Dynamics and renown for its navigational accuracy.

One demonstration included an extended autonomous survey mission performed to show the extent of the navigation accuracy and trajectory performance, as well as the quality of the high-resolution sonar images captured.

Another involved a range of autonomous missions in the lake including seabed survey, structure inspection, obstacle avoidance and a docking manoeuvre into an underwater docking station. A fibre link was used to allow live viewing of the data being gathered.

Visitors had an opportunity to examine the Sabertooth, a breakthrough hybrid concept that combines the autonomy and range of an AUV with the manoeuvrability and hovering capability of a light-work ROV – making it an ideal vehicle for long-range missions where there is a need to stop and conduct a detailed task.

Fitted with the advanced Saab Seaeye iCON intelligent control system, its behaviour-based architecture offers a decision-making capability that can, in survey mode, react to unexpected data by deviating from a programmed mission to gather data or perform a task before resuming its mission plan.

It is intended that the Sabertooth can be left at deep and distant locations where it can operate from a remote subsea docking station ready to be launched on routine inspection, repair and maintenance work, and deal with emergencies.

At such a remote location, where it might remain for a year, tooling packages can be stored at its docking station where batteries can be re-charged, data and video downloaded and fresh instructions uploaded over the internet.

As offshore operators go deeper and into more difficult to access areas, the Sabertooth Hybrid AUV/ROV concept is attracting interest from those looking for a reliable and versatile underwater vehicle that can accommodate a wide range of data acquisition systems and tooling onto a single platform.

The strategic alliance between Saab Seaeye and Saab QPS bridges the gap between hardware and software development that is bringing innovative technology opportunities to the industry and setting new standards.

Saab QPS is a software design company specialised in Hydrographic and Maritime applications. The main activity of QPS is focused on system integration and the development of software systems that are used for hydrographic surveys and seafloor mapping.

Fabio Bartolotti of Micoperi, the contractor responsible for the project, says that the Falcon worked every day of the salvage operation, spending over 1000 hours in the water.

He says that every single time a diver entered the water the Falcon was deployed in their support and for their safety.

The ROV was sent into places too dangerous for divers, and on examination and survey missions without the need for divers.

In addition the Falcon was employed for tasks including the scanning procedure needed to measure the distance between the legs of the support platform built below the ship ready for the raising of the vessel.

For salvage operations such as this, the Falcon has the advantage of being small enough to be easily manhandled into the water, yet has the thruster power to work in strong currents and the intelligent architecture to handle a range of tools including manipulator, cutters, cameras and survey and sonar systems.

This special blend of muscular intelligence makes it a vehicle of choice for salvage tasks where investigation, search and recovery are involved.

Powerful cutters can be fitted to clear debris and entanglements – including polypropylene rope up to 19mm thick and steel rope up to 12mm diameter.

Its sophisticated manipulator has both a powerful grip and a light touch for handling hefty or delicate items.

Cameras, along with variable intensity lighting, can be employed to view places too difficult or too confined for divers to access safely.

If a diver must be deployed, the ROV can preview the area, identify hazards and pinpoint the site of interest. It can then take down a safety line, if needed, ready for the diver to decend safely to the location.

Tools and equipment can be transported back and forth to the diver, as necessary, saving valuable dive time.

Time limits for the Falcon are not a consideration as it can work tirelessly in virtually any location, for however long it takes.

The salvage contract was won by Micoperi in partnership with the American company, Titan Salvage, as best able to fulfil the main objectives set out in the tender specifications: removal of the wreck in one piece, minimal risk, minimal environmental impact, protection of the local economy and tourism industry, and maximum working safety.

Micoperi is a long-established and leading offshore contractor specialising in underwater construction and engineering.