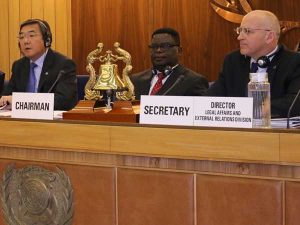 From the opening procedure

14/04/2015 IMO Secretary-General Sekimizu has opened the Legal Committee, 102nd session (14-16 April), which is being chaired by Mr. Kofi Mbiah (Ghana). Items on the agenda include: facilitation of the entry into force and harmonized interpretation of the HNS Protocol, 2010; liability and compensation issues connected with transboundary pollution damage resulting from offshore oil exploration and exploitation activities; and interpretation of the 1992 Fund Convention.