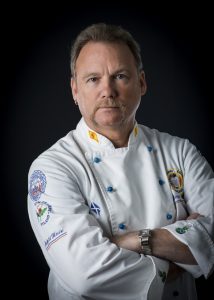 Allowing seafarers to eat fish they have caught off the side of their ship is a sure way for the crew to contract food poisoning and it can take a whole ship out, according to one of the shipping industry’s leading voices on food quality and catering standards onboard ship.

This comment by Henry Anderson, Consultant Chef and Founder of Marine Catering Services, followed recent media reports that 14 crew from a Japanese bulker in Canada were hospitalised after they contracted ciguatera fish poisoning which is caused by eating tropical fish that consumed toxin-producing algae.

“When I am onboard vessels training the crew on menu preparation and food hygiene, I give clear instructions to all crew members not to go fishing for fresh fish when ships are at anchor as you don’t know if the fish has been caught in red tides. Nor are you able to detect whether any caught fish has toxins within their system, as that can only be obtained by laboratory examination of the product.

“Ship owners and managers should buy their fish products from reputable suppliers as this proves traceability of the product purchased and complies with due diligence procedures should anyone should become sick. This is also backed up by written food temperature controls in which any meal can be traced back to the menu, ” he said.

Ship owners can find themselves privately sued for damages if a claimant can prove that the 1990 Food Act has been breached and due diligence has not been carried out, Mr Anderson warned.

Henry Anderson is an experienced Master Chef and Catering Consultant. Having learnt his trade over many years working for a number of hotels and commercial units, he subsequently became a training development chef for a large catering company on sea going vessels.

It was here that he trained multi-national catering staff to ensure they were fully compliant with industry standards in line with ILO/MLC requirements. In 2004 he decided to set up his own company, Marine Catering Services (MCS), as he felt that he could help to make big improvements in the training, procedures and practices of the marine catering industry.