Top Posts
The BDI drops down to 1,540; Wets maintain...
John Faraclas of All About Shipping contributes to...
Irene Rosberg addresses the 22nd Parliamentary Intelligence-Security Forum
Ready to hit the water? So are these...
Coach Fall/Winter 2022: A Collection That Feels Like...
Badgley Mischka Fall/Winter 2022: Wearable Sculpture in Ultra-Chic...
Power, philosophy and heroism of central bankers, and...
New superyacht goes up in flames
American Club Circular no.23/22 – EU Sanctions –...
Hot Port News from GAC
Ulla Johnson Fall/Winter 2022: Organic Forms and Nature’s...
American Club Member Alert (August 12, 2022) re...
Witherbys leads the way in digitisation as 5,000...
Home HRCompany Profiles Heads up for Meercat after new contract win with BAE Systems

Heads up for Meercat after new contract win with BAE Systems 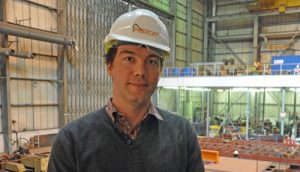 The 14-strong company, based at Trafalgar Wharf in Portchester, near Portsmouth, Hampshire, is on target to complete the boat by the end of May.

It will be used in Portsmouth Dockyard for subsea maintenance, repairs and inspections on Royal Naval vessels and installations, including maintenance support to waterfront jetties, the Type 45 Destroyers and the Queen Elizabeth Aircraft Carriers when they arrive in Portsmouth in 2017.

The new workboat will include a twin Doosan L136Ti engine with a 33Kva generator and a three-phase compressor.

Its AMCO-VEBA crane is capable of lifting 790kg at a very generous 14.1 metres, whilst its full hydraulic hand tool capability is provided by a separate JCB hydraulic engine.

With a fully integrated Dive X high pressure diving system, the vessel will have full communications capabilities and video compatibility.

This dive support vessel will be the second to be delivered by Meercat after it was bought by Britain’s largest independent ship repairer Burgess Marine in September 2014. It will be the 23rd vessel built by Meercat since it was formed in 2006.

James Lewis, Operations Director at Meercat Workboats, said: “The design brief called for a manoeuvrable vessel, with a wheel-house, messroom, designated dive room, and a crane.

“It will primarily support BAE Systems’ diving teams for duties connected with Royal Navy vessels and port installations in the naval dockyard.

“We are making swift progress on the dive support vessel and expect to finish on schedule and on budget.

“We are pleased to be working with such prominent and well-respected company as BAE Systems.

“This order is one of our most significant in recent times as we continue to grow as a leading supplier of workboats, especially in the dive, ports, harbours and aquaculture markets.”

Derren Chamberlain, BAE Systems Maritime Services Supply Chain Director, said: “As a company, we are committed to working with local companies, many of whom are Small Medium Enterprises (SMEs).

“This order with Meercat is a welcome demonstration of how we can utilise first class services in the Portsmouth area and also support the marine-related local economy.”

Known for being easily transportable by road to difficult locations, Mercats are used on the coast, in ports, harbours, on lakes and inland watercourses.

Other ongoing projects include a prototype canal tug as well as a multi-purpose workboat.

Financial details of the deal were not disclosed.