Maritime jobs up for grabs 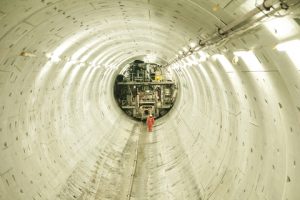 Dubbed the ‘super sewer’, the £4.2bn Thames Tideway Tunnel will upgrade London’s antiquated sewerage system to cope with the demands of the city into the 22nd Century. The project will create over 4, 000 jobs directly and a similar number in the supply chain, including up to 600 jobs on the River Thames.

That’s because 4.2 million tonnes of excavated material will be transported down the Thames. This 30% increase to the existing river traffic will require expert maritime skills and the search is on for new recruits keen on a career afloat.

Thames Tideway Tunnel has entrusted the job of promoting career opportunities on the Thames to Jobs in Maritime, the global job site and recruitment service of the National Maritime Development Group, the UK maritime network for industries influenced by sea and waterways.

Jobs in Maritime is running a series of events in London, Essex and Kent for anyone interested in learning more about a career on the river. They can learn more about the tunnel project, meet some of the people involved, find out about roles and career progression and register their interest in jobs when construction starts in 2016.

More than 1, 000 people have attended the first two events held in Kent and Essex, with nearly 800 of them registering their interest to work for the project. The next event is at the Queen Anne Building, Old Royal Naval College, University of Greenwich at Greenwich Maritime, London on Thursday 30 April.

Anyone not able to attend are urged to register their interest at www.jobsinmaritime.com

Peter Green of Jobs in Maritime says: “These jobs are open to anyone interested in a career in maritime and will appeal to existing marine workers looking for a new challenge, ex-Armed Forces personnel, unemployed people and school leavers seeking apprenticeships. For example at our last event at Tilbury’s London Cruise Terminal we attracted people who already work in the port, fishermen from Southend, and people from Lowestoft who work in the offshore renewables sector.

“We’re committed to ensuring the tunnel project creates a lasting legacy for the people of Britain and in particular maritime workers, creating new jobs and lasting careers that continue beyond the construction of the tunnel.”

Lewis Brown is a 29 year-old former river apprentice who has achieved exceptional success and rapid progression in his maritime career and now jointly owns and manages his own shipping company, Thames Shipping Ltd.

He said: “The opportunities on this river, London’s ‘Liquid Highway, ’ are endless. Londoners live with this thriving, exciting, commercial river right on their doorstep yet many have never considered the job opportunities it provides. I’d encourage anyone who has ever thought about a career in maritime to come along to one of these events and find out more. The River Thames has given me a fantastic career path and I know it can offer people great prospects and endless horizons.”