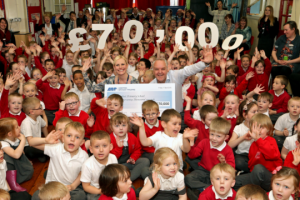 After a year of fundraising to mark the 100th birthday of Port of Hull’s King George Dock, Associated British Ports (ABP) Humber has handed over a cheque worth £70, 000 to Marfleet Primary School.

The school was chosen as the company’s Charity of the Year for 2014, following a visit by ABP Director Humber, John Fitzgerald.

“The school was clearly struggling to accommodate its pupils in a tiny Victorian building which is flanked by heavy industry, ” said John.

“As it was originally built to educate the children of dockworkers it seemed fitting that we did something that would help the school to grow so children from different school years didn’t have to share classrooms and would benefit from an improved learning environment. These are the employees of the future so it’s important they get the best start they can.

“We set ourselves the task of raising £50, 000 during our Centenary year, for a new classroom and I’m proud to say that with the help of our partners, customers, suppliers and colleagues from across the group, we’ve beaten that original target by quite some margin. I should also thank Archbishop Sentamu Academy, which has provided much-needed support throughout the fundraising process.”

Throughout 2014 ABP staff from across the Humber threw themselves into fundraising for the school, organising port open days, sponsored walks, inter-port football matches, golf days and cake sales. Some of the more unusual activities included a clay pigeon shoot and a charity ‘dunk’ courtesy of Humber Offshore Training Association (HOTA) and its helicopter simulator.

One of the most successful events was a charity dinner with former England manager Kevin Keegan, who generously gave his time to support ABP’s fundraising efforts. The dinner was attended by ABP staff, customers and partners and raised a more than £20, 000.

Acting Head Teacher of Marfleet Primary School Antonia Saunders was delighted to accept the cheque and expressed her gratitude to the staff and partners of ABP.

She said: “This sum of money is beyond our wildest dreams. We knew that the staff from ABP would work hard to raise as much money as they could for us, but we underestimated their levels of dedication and commitment. We are incredibly grateful.”

Macy Turner (9) said: “This money is going to make a big difference to us. Our old classroom is too small and year five and six have to share it, which means the teacher has to set lots of different learning objectives which is very hard. A new classroom will make a really big difference.”

Jodie Lee (11) said she was ‘happy’ and ‘astonished’ by the amount of money ABP had managed to raise. She said it was ‘lots more than we imagined.’