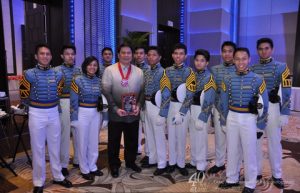 Bibby Ship Management Philippines, Inc, has been recognised by the Filipino Association for Mariners’ Employment Inc (FAME) for its vital role in the development of the Philippine maritime industry.

The company, part of the Bibby Ship Management Group Ltd, received a plaque in recognition of its “active support and loyal affiliation” to the Association for the last 15 years. FAME is celebrating its fourth decade in the maritime manning business.

Jonathan Palma, President/CEO of Bibby Ship Management Philippines, received the award during FAME’s 40th Anniversary celebrations, which culminated in an Appreciation and Recognition Night on Thursday March 19th in the Pandango-Polkabal Ballroom of the Manila Hotel. Business leaders and Government representatives joined together in celebrating the important role FAME has played over the past 40 years and the Philippine industry’s manning success.

Mr Palma said: “Bibby Ship Management takes an active role within the Filipino Association for Mariners’ Employment and we are delighted to be recognised in this way during this time of celebration for the Association. We congratulate FAME on a successful forty years and wish them every success for the coming decade.”

Founded in 1971, the Filipino Association for Mariners’ Employment Inc is the first and largest organization of manning and shipping companies in the Philippines, with 120 regular members and seven associate members. FAME is a successful example of public/private partnership, linking manning companies and government agencies in jointly developing the Philippine maritime sector which contributes almost 30% of the world’s seafarers.