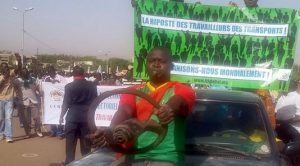 22/04/2015
The UCRB called the strike to demand implementation of the collective bargaining agreement (CBA) for road transport unions, which was signed in December 2011. It also demanded: an end to harassment of workers on the road; a substantial cut in the time it takes trucks to be processed at the border with Togo, currently up to seven days; a reduction in the length of training; and a cut in the cost of driving licences.

At the end of the strike officials from the UCRB and the Burkina Faso Trade Union Confederation were joined by representatives from the ITF and the coalition of national union centres at a meeting with the transport minister, Seydou Traoré. He committed to enforce the agreement and reduce the delay and cost of driving licences, and said he would consult with the government and UEMOA (the Economic Community of West African States) over the claims of road harassment and border processing times.

Later the same day, ITF Africa regional secretary Joseph Katende led a delegation of the national co-ordination committee and the general secretary of the CSB national centre. At the meeting, the Burkina Faso prime minister Yacouba Isaac Zida said that the transport sector should implement the CBA to benefit all.

Katende said: “These meetings between the affiliates and the president were encouraging, and come soon after the positive meetings we had recently with the prime minister. The ITF will keep a close eye on developments as the unions’ concerns need to be addressed urgently and the CBA fully implemented.”