‘No Mercy’ in Hyères 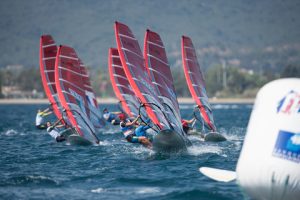 When asked about how she dominated the day, Dziarnowska commented, “there is no mercy”. With the new ISAF Sailing World Cup format exciting the sailors competing in the French Riviera, no mercy can be shown if they want to end up on top and the Polish racer demonstrated that perfectly well.

A strong breeze, which built to around 16 knots, filled all five courses consistently throughout the day allowing sailors to truly put all their skills to the test.

The leader boards are starting to take shape across the ten Olympic and two Paralympic disciplines in Hyères ahead of the Medal Races on Sunday 26 April where a share of the €72, 000 prize fund, ISAF Sailing World Cup Final spots and World Cup glory are on offer.

Maja Dziarnowska (POL) was beaming with smiles after Women’s RS:X racing having dominated the day taking a trio of victories.

After racing the Polish racer said, “Compared to yesterday when I finished 29th overall, today was good. I had a lot of fun, good speed, I didn’t make many mistakes and that explains my success.

Dziarnowska’s performance has pushed her up from the middle of the pack to third overall. Lilian De Geus (NED) holds the lead on 13 points after a 2-4-4 day followed by Isobel Hamilton (GBR) on 22 points and Dziarnowska on 31.

Despite De Geus holding a steady lead the day belonged to Dziarnowska who revels in Hyères when the breeze is in, “I really enjoy staying in Hyères because we spend a lot of time training here every year. We spend all of April here so I know this place quite well. The wind shifts, the waves and so on. It’s helping.

“This place this year only has 40 women starting and they’re the top 40 in the world so it makes the competition really hard. The smallest mistake costs you hugely and you can lose a lot of places.”

The world’s best Women’s windsurfers are racing in Hyères and anticipation was high in the build-up as Dziarnowska concluded, “The format is super exciting. I was waiting for the start of this event for a long time, I couldn’t wait. Just to see the progression of myself and the other girls, it’s been really exciting.

“I’m enjoying what I do, I enjoy the training, I enjoy staying with my team. We’re called Energa Sailing Team. We’re cool people and then being with all the women here, I love this lifestyle.”

There were ups and downs across the Men’s RS:X fleet as the competition ramped up a notch.

Byron Kokkalanis (GRE) started the day exceedingly well by taking the opening race victory as he explained, “I made some good choices sailing upwind and jumped up three places. I was ahead rounding the top mark on the second lap and then I just had to chase the Israeli guy [Nimrod Mashiah] and I slid past him at the start of the slalom.”

Kokkalanis struggled in the remaining races posting a 12th and a 23rd, he continued, “I got hit bad at the start in the middle race and I was nearly last so I had to come back but in the last race, something felt really bad. I just couldn’t keep up.

“The conditions changed and the wind picked up more so maybe it was my technique or something with my equipment that I didn’t tune properly so all these things need to be fixed.”

Israel’s Nimrod Mashiah was the star of the day. Double seconds and a race win catapult the Israeli up into second, one point off leader Piotr Myszka (POL).

Just eight points separate first to seventh place in the Men’s RS:X after six races. Six more fleet races follow with the potential for further ups and downs ahead of Sunday’s Medal Races.

It was a busy day for the Nacra 17 fleet. Four races in a good breeze ensured some tired faces back ashore after racing.

Tired, yet full of enthusiasm after racing was Billy Besson and Marie Riou (FRA). The dynamic French duo started the day with back to back victories. A 12th and a third followed which hands them a handy 14 point lead.

“We’re happy because that is a good day for us, ” commented a Riou after racing.

The Nacra 17 fleet is of the highest calibre. Olympic medallists and World Champions make up the highly competitive fleet. Maintaining a clear head is key as Riou explained, “You have to always keep the focus on your job. You can lose distance and places quickly in this fleet.

“It’s really tough to sail at this event but really good to sail in a fleet of 40 good teams. The format is good for sailing because for spectators they can follow and understand our sport, it’s better than ever before.”

It was a day for the Great Britain’s Giles Scott and Ed Wright. The pair sailed consistently well throughout the two races to land them in first and second place respectively at the end of day two.

Scott is well on track to add another podium finish to his already impressive succession of first places he has collected over the last 12 months.

The stronger winds provided the ideal conditions on the water for all of the fleet making the competition for first place even harder. A race win was also claimed by Tapio Nirkko (FIN) who is tenth overall.

Ida Marie Nielsen and Marie Olsen (DEN) solidified their spot at the top of the 49erFX leaderboard. The Danes 6-1-6 scorelines sees them atop of the pack on 17 points.

Nielsen and Olsen have proven themselves in the light flukey Hyères breeze that was present on the opening day as well as the consistent breeze on day two. Time will tell if they can continue their good form to take home gold, a share of the €72, 000 prize pot and a spot on the startline at the ISAF Sailing World Cup Final in Abu Dhabi.

Peter Burling and Blair Tuke (NZL) asserted their dominance once again in Hyères with a 1-1-2 giving the duo a clear lead ahead of Jonas Warrer and Anders Thomsen (DEN) in second place.

This is the first ISAF Sailing World Cup regatta for Burling and Tuke in 2015 and half way through the regatta they are well on the way to continuing their unbroken record of regatta victories.

Nathan Outteridge and Iain Jensen (AUS) also enjoyed a strong day on the water, recording three top fifteen results. They sit in third and still have the opportunity to build on their current success over the next three days.

There was some top quality racing throughout the entire fleet and Erik Heil and Thomas Ploessel (GER) claimed a first in the last race of the day.

It is tight at the top in the Laser Radial with Anne-Marie Rindom (DEN) and Evi Van Acker (BEL) locked on ten points apiece.

Both competitors put their hard opening day behind them to bounce back nicely. Rindom discarded her 24th from day one and added a sixth and a bullet to count ten points. Van Acker scored a 4-2 on the second day, losing her 17th, to share the lead with Rindom.

The day’s opening race win went the way of 2013 Laser Radial World Champion Tina Mihelic (CRO). The Croatian is 27th at the moment but has the skills and drive to work her way up the leaderboard with four more fleet races remaining ahead of the Medal Race.

It was a similar scenario in the Laser. Tom Burton (AUS) and Nicholas Heiner (NED) discarded their opening day 33rd and 24th respectively to sit in first and second overall.

Burton was in fine form, taking a third and second to take the lead on seven points. For Heiner, his 4-5 on the day is enough for second. Tonci Stipanovic (CRO) is three points off the Dutchman.

Race victories were picked up by Julio Alsogaray (ARG) who is 19th and Kristian Ruth (NOR). Ruth enjoyed a terrific day taking a fifth alongside his bullet and he moves up to eighth.

Following on from Hannah Mills and Saskia Clark’s (GBR) second place success at ISAF Sailing World Cup Miami and, with only four races left until the Medal Race, they top the Women’s 470 leaderboard by the narrowest of margins.

The day provided the perfect conditions for Mills and Clark who started the brilliantly by gaining a first place and an 18th which the pair have discarded. Mills and Clark have no time to relax however, as the fight for the top three places are extremely close.

Rounding off the top three behind the Brits is Anne Haeger and Briana Provancha (USA) in second and Jo Aleh and Polly Powrie (NZL) in third.

The Men’s 470 took to the water this morning and, after two more races Croatian pair Sime Fantela and Igor Marenic end the day in first place five points clear of Gabrio Zandonã and Andrea Trani (ITA) in second.

Race wins on the day went to Luke Patience and Elliot Willis (GBR) and Stuart Mcnay and David Hughes (USA) who are sixth overall.

In the Sonar, Colin Harrison, Jonathan Harris and Russell Boaden (AUS) remain at the top of the scoreboard after achieving a second and a third place which the team have discarded. However, the Australian team cannot afford to relax just yet as, hot on their heels and only one point behind are Bruno Jourdern, Eric Flageul and Nicolas Vimont-Vicary (FRA) who achieved a bullet in the second race of the day to land them in second place overall.

Thursday is set to be another interesting day on the water for the class as only one point separates second and third place from the top spot.

In the 2.4mR class, Damien Seguin (FRA) had a fantastic day on the water and showed that the stronger conditions suited his style. Seguin gained a second and first place in the two races knocking Bjørnar Erikstad off the top spot and relegating him into second place.

Seguin is no stranger to this event after claiming second place at last year’s ISAF Sailing World Cup Hyeres and with only four races left to go before the medal race, is well on his way to gaining another place on the podium.

Megan Pascoe (GBR) rounds off the top three sailors in third place. While a race win also went to Lasse Klötzing (GER) who finished the day in seventh place.

Racing resumes on Friday 24 April at 11:00 local time when sailors will continue to compete for a place on the podium and a chance to claim their share of the €72, 000 prize money on Sunday 26 April.