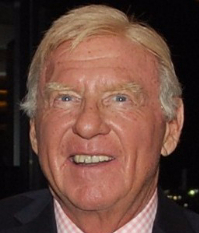 It is with deep regret that we inform you of the death of the Club’s International President, Captain San Juan Dunbar, on Friday, April 24,  in his hometown of Portland, Maine, after a short illness.

Captain Dunbar was dedicated to the Propeller Club and its mission, and served in a wide variety of roles at the local, regional and international levels of the organization:  Port President and Board member, Regional Vice President, long-time member of the International Executive Committee and Board of Directors.  He was elected First Vice President of the Club at our 86th Annual Convention in New Orleans, La., in 2012, and became International President at the 2014 Convention in Louisville, Ky.  A profile of Capt. Dunbar appeared in our newsletter earlier this month.

Visitation is planned in Portland from 3-7 p.m. on Thursday, April 30, and funeral services will be held at 11 a.m. on May 1, with burial to follow.  Captain Dunbar’s full obituary with additional details will appear in the Portland Press Herald on Tuesday, and will be also available on the newspaper’s website at that time.

To Captain Dunbar’s family, his colleagues in the Propeller Club Port of Portland, and to his many friends, we extend our deepest sympathies.
__________