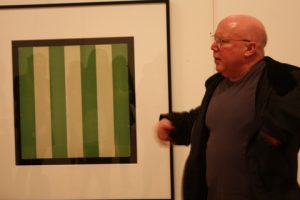 Christopher Williams: The Production Line of Happiness. A challenging exhibition at Whitechapel Gallery.,  By James Brewer

“To represent is not to endorse, ” says photographic artist Christopher Williams, whose imitations of commercial and industrial images show promotional messages that are just that little bit flawed. London’s Whitechapel Gallery has launched the first UK retrospective of the Los Angeles-born artist, whose work is not startling, but is presented in a way and in an ambience that is meant to make the viewer reassess his relationship with manifestations of, and settings of, art.

You might expect neat picture labelling and tidy walls in any art gallery: disappointment! Until June 21 June 2015, in three galleries at the Whitechapel, Christopher Williams does it his way.

He counts his photographs as part of a larger system of display which includes exhibition design, walls, books, posters, videos, and signage. “So you can think of the whole room as a historical wrapper into which my show is built, ” he says. “The wall is part of the work.” 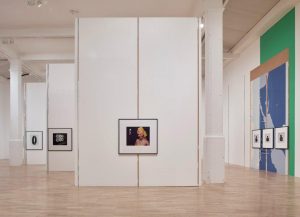 His remodelling of the spaces involves pasting demonstrably over design remnants and fragments from the previous Whitechapel exhibition,  The Adventures of the Black Square: Abstract Art and Society 1915–2015.

Then there are colour cues to the logos of big photographic companies, such as Nikon, Kodak, Fuji and Agfa. Christopher Williams reveres the design pioneering of Richard Hamilton, one of the artists who in 1956 took part in the This is Tomorrow at the Whitechapel Gallery. That was an iconic show because an architect, a designer, an artist and a theorist were asked to amalgamate their approaches and deploy new methodology. With no interpretation panels or other available information, viewers back then had to make their own judgments as to how to navigate inside the gallery and interpret what they saw: just as in this 2015 Williams event.

“I don’t think of art as a solitary activity.  I think of it as a dialogue between the artist and the public, ” says the protagonist, and even the way the works are hung, some at a low level, is part of a mission to make people “slow down, and look at things slowly.”

One of his captions, when you find it in the catalogue, is all of 43 lines – “my titling is either too short or too long, ” he confesses; but in fact there are no captions to be seen in the exhibition itself: “maybe we can guide the viewer through the show with colour, rather than language.” The green which is salient is both the colour of the Whitechapel edition of the catalogue, and of a tile in a photo by artist Daniel Buren, which is included in the exhibition.

Echoes of 1960s advertising are seen in some of the Williams photos, which cheekily contain aberrations of the type that would before publication have been removed or airbrushed, such as the dirty feet and imperfect skin of a lingerie model. The artist wants us to adopt a clear, active way of seeing, examining an object as closely as possible.

In all, there are some 50 photographs from a 35-year-to-date career – starting with analogue and moving to digital.

“You can find the index of my work very clearly in everyday culture, ” says Williams. His photo of a cockerel followed a snap decision to buy on his daily visit to the news stand a poultry magazine, and becoming fascinated by the illustrations. 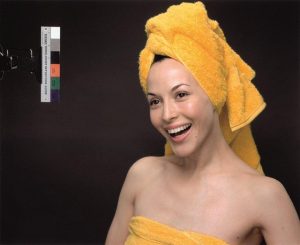 Reinforcing the artist’s concerns with architecture and display, a work consisting of a photo of a bouquet of flowers and a wall for the display of artworks,  Bouquet for Bas Jan Ader and Christopher D’Arcangelo (1991) pays tribute two artists who died young in the 1970s.  “I wanted to insert them back into the discussion.”

Dix-huit leçons sur la société industrielle (Eighteen Lessons on Industrial Society) (2003– ongoing) includes glossy images of everyday objects such as apples and tyres, and models and products next to the kind of colour charts used by photographers.

Christopher Williams studied at the California Institute of the Arts under the first wave of West Coast conceptual artists in the 1970s. He has participated in many exhibitions and works in Cologne and Los Angeles. 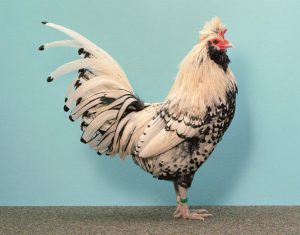 The exhibition has already been seen at the Art Institute of Chicago and the Museum of Modern Art, New York.

Christopher Williams: The Production Line of Happiness, is at Whitechapel Gallery, London, until June 21 2015.