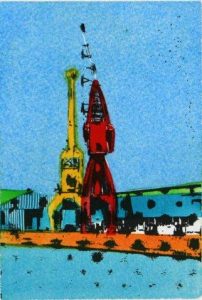 It might seem an odd question, but can the sturdy cranes that are a vital part of seaport operation have a personality? Could they even find a means of chatting to each other, or become angry with each other?

Only a professional crane driver will ‘know’ the answer to those questions, but artist Clare Johnson sees more than a structure of stolid industrial metal when she visits dockland. 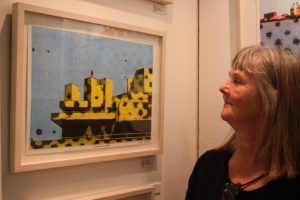 Clare visualises these beasts of the quayside as confident in their ability to throw their considerable weight about if they do not get their way. When an artist captures the essence of the real world, he or she does not hesitate to overlay it with imagination, and one can see that graphically in Clare’s output.

Her latest print series has titles such as Industrial Conversation, and Left Hook and Right Hook. These inspirations came from a day at the commercial port of King’s Lynn,  which is part of the Associated British Ports group. On her day there, a Saturday, things appeared rather quiet at the terminals, but who knows what was going on in the ‘minds’ of the cranes?  Normally such equipment at King’s Lynn has plenty to keep it busy because the port specialises in cereals and other agricultural products, forest products and steels: handling around 500, 000 tonnes a year in all types of cargo.

With her keen interest in industrial architecture, Clare is drawn to locations such as King’s Lynn. “The Hanseatic town of King’s Lynn was one of England’s most important ports from as early as the 12th century and this maritime past is still very much in evidence today, ” says the Visit West Norfolk website. “Fine old merchants’ houses stretch down to the river between cobbled lanes and the elegant Custom House overlooks the harbour.”

Clare took space at The Other Art Fair in London in April 2015 to introduce the public to her compelling designs inspired by the port of King’s Lynn and by industrial and architectural landmarks elsewhere in England. She specialises in combining photography, mono-printing and screen-printing to produce vintage-style postcards, hand-tinted in various colours. She will print editions of the same design in different hues, and it is surprising how a change of colour saturation can endow a change of mood (even to those inanimate dock cranes, although with advanced technology they just about have their own minds these days).

She continues to explore East Anglia from her home overlooking the inner harbour of the Suffolk port of Lowestoft, to which she moved fairly recently from London.  Not far from her home is a grain silo which she has depicted in her prints of what she calls The Most Easterly Grain Tower. Lowestoft is the easternmost town in England.

Readers will recall that Clare has a knack of choosing catchy titles. Her print of London’s Royal National Theatre (usually just known as the National Theatre), on the South Bank of the Thames, is called Concrete Drama. The building’s heavy architectural bulk is not to everyone’s taste.  Prince Charles once described the building as “a clever way of building a nuclear power station in the middle of London without anyone objecting”.

More details about Clare’s work and exhibitions are at www.clarejohnson.co.uk