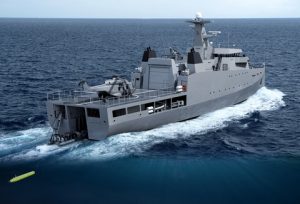 This new generation of re-configurable Damen OPVs is highly efficient and incredibly versatile. Damen’s famous Sea Axe hull shape is used for these 2nd generation OPVs. Due to this hulldesign, these vessels demonstrate superior seakeeping including exceptional low heave accelerations. This makes the vessel very comfortable, even in stormy sea states. Since the hull is designed to reduce water resistance, the new OPV is also very fuel efficient and capable of speeds up to 25/26 knots.

Versatility has been reinvented by three newly developed multi-mission locations–namely the bridge, hangar and bay. The Multi-Mission Bay (MM Bay) can be equipped with dedicated mission modules (e.g. mission containers) for missions such as counterpiracy, counter-drug operations, anti-mining warfare (AMW), search-and-rescue (SAR) etc. The MM Bay is also equipped with a nine metre RHIB (rigid-hulled inflatable boat), which can be launched over a dedicated slipway through the rear of the vessel while the OPV is sailing. In the Damen-built Holland Class Ocean Patrol vessels for the Royal Netherlands Navy this system has already proven to be safe in operationsup to SS 5 conditions.

Unlike other OPVs, the command-and-control centre (C2 Centre) is located directly behind the bridge. Damen calls this development their Multi-Mission Bridge (MM Bridge). Both spaces can be separated by means of a blinded sliding wall. OPVs are less likely to take part in combat situations such as those faced by a frigate. During a mission, when lowering the sliding wall, situation awareness in the C2 Centre is improved, allowing C2 Centre officers to observe the situation immediatelywith their own eyes.

Mr Van Rooijcomments: “Today OPVs don’t engagein combatsituationsas often as frigates do, however, fast and effective coordination during a ‘chase’ is essential for an OPV.”

The Multi-Mission Hangar (MM Hangar) is capable of storing an 11-tonne NH-90 helicopter and aUAV (unmanned aerial vehicle) such as the Boeing ScanEagle®. The MM Hangar has been designed so that the OPV crew can deploy either the helicopter or the UAV without having to move either one.Furthermore, there is space for a spare parts store and workshop for both the helicopter and UAV.