Lisnave takes to the field as Europe’s shiprepair supermarket 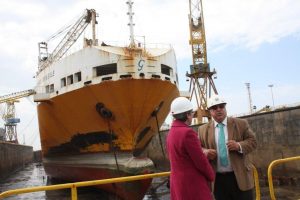 Lisnave takes to the field as Europe’s shiprepair supermarket,  By James Brewer

Imagine a busy working area the size of 210 top-class football pitches, covering a dedicated terrain beside a deep river estuary.  That way you can begin to visualise the immense, 1.5m sq m extent of Lisnave, Europe’s largest shiprepair yard.

By comparison, a soccer field is tiny at ‘only’ 7, 140 sq m. The Portuguese enterprise is of a scale to impress any visitor, as it did representatives of this site, AllaboutShipping, when they were shown round the complex by the industrious, energetic and popular public relations director, Humberto Bandeira.

To be truly a “shiprepairer to the world’s fleet, ” as Lisnave calls itself, you need a whole island, and that island is Mitrena, in the River Sado. The locality gives ample room for a lengthy inventory of assets. This includes 20 travelling cranes, a 500-ton gantry crane, stationing for powerful tugs managed by the two specialist companies Rebocalis and Rebonave, workshops, staging, transporters for the delicate operation of moving large sections of steel, dockside arms, painting and blasting equipment, air compressors, a pump-house with four pumps for changing water levels, water treatment plants, lighting units and much more besides.

The largest of the six drydocks is 450 m by 75 m, with draught of 7.6 m, and there are nine repair berths. This offers considerable flexibility, said Mr Bandeira, and is an essential factor in reducing to a minimum downtime for ships, the operators of which are often anxious to get them back to prompt business in the Atlantic and Mediterranean markets.

Just as no man is an island, no shipyard is an island in terms of productivity: it can be successful only at the hands of a committed and skilled workforce. Lisnave is looking to the future by putting an emphasis on education and training of new people who are taking on responsibilities as older workers retire. 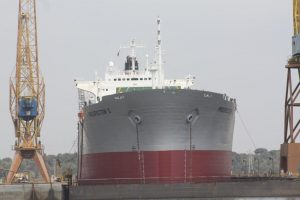 Like most employees in economically hard-pressed Portugal, the labour force at Lisnave has seen their wages under severe pressure in the last few years, but there has been some cheer in the latest salary pay-out. The yard’s 470 permanent workers in May 2015 are receiving bonus handouts totalling Euro1.2m, reflecting the achievement of a reasonable company profit and of their hard work in 2014. The size of each worker’s premium is being based on performance and attendance record.

For the island of Mitrena, the shelter of the Tróia peninsula ensures safe anchorage for ships of all sizes; and to this benefit can be added the all-year temperate climate of this part of Portugal, which minimises the risk of weather disruptions to repair, grit-blasting, water-blasting, painting and other operations.

Tróia is best known to the Portuguese public and many holidaymakers as a summer resort – with its crystal clear water and “the best beach I’ve ever been to, ” according to the commentary of one visitor alongside his YouTube video of sun-worshippers. Such ambience is an attraction of which shipowners’ representatives have been known to take advantage. 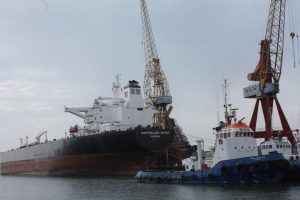 The nearby city of Setúbal offers much old-town and architectural heritage, including the building where was ratified the Treaty of Tordesillas, first signed in the Spanish town of Tordesillas in 1494 to divide spheres of influence in the Americas between Portugal and Spain. Setúbal is in easy reach of fine sports facilities including tennis courts and golf courses. It is one of Europe’s top gastronomic spots for a range of delicious seafood. It is the hometown of Chelsea football manager José Mourinho, who started his career coaching the youth team at the local Vitória de Setubal club; but that is a story for other media outlets…

At Lisnave, visiting owners’ superintendents, project managers, surveyors, inspectors, consultants, engineers and supervisors are made to feel ‘at home’, as the company provides them with temporary offices so that they are comfortable as they work. This has been seen as appealing in terms of winning repeat business. 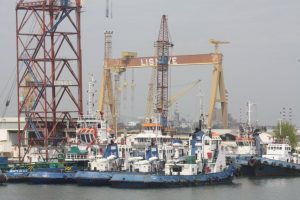 Tugs ready for action at Lisnave.

Complementing preparations for repair treatment is an adjacent station for tank-cleaning and gas-freeing owned by Eco-Oil, which also deals with Marpol-classified wastes from ships up to ultra-large size. It is one more offering helping deliver the ‘one-stop shop’ concept – or, given the grand design of Lisnave, perhaps that should read ‘one-stop supermarket.’