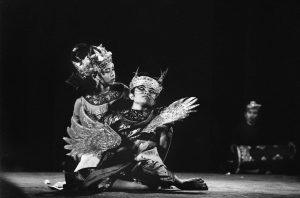 It was one of the last sunbursts of glory before the rule of Mohammed Reza Shah Pahlavi collapsed. In an opulent display of the splendours of the Persian past and Iranian and international present, the Festival of Arts Shiraz-Persepolis brought together a tapestry of Western and Eastern performers, every summer from 1967–1977.

An archive display at London’s Whitechapel Gallery documents the history of the festival, installing much atmospheric black-and-white photography of the era and other material seen for the first time in the UK. Entry is free to the exhibition, which runs until October 4 2015.

The festival was scrapped by leaders of the Iranian revolution, but its avant-garde legacy remains.

It had a twin base: Persepolis, the royal seat for Darius I of the Achaemenid Empire founded by Cyrus the Great, and the university city of Shiraz, 70 km away. The ruins of Persepolis provided spectacular backdrops for open-air performances, while Shiraz is one of the oldest cities and long noted for its role in the arts and literature.

The Shah sought particularly through the festival to legitimise his rule as a continuation of this ancient history, and the event provided Empress Farah Diba with the means to highlight and further the cultural prowess of Iran. Thus, traditional Persian arts were showcased alongside contemporary drama that shocked some sensibilities, and far-out music by composers including Iannis Xenakis, Karlheinz Stockhausen and John Cage.

Liberality in the arts was one thing; freedom of expression for ordinary Iranians was out of the question, and the secret police kept the lid slammed tight on political dissent.

Farah Diba, convenor of the festival, put out the welcome mat right away for Western artists in addition to musicians from India, Indonesia and elsewhere in the East. This encouraged young Iranian musicians to experiment, and to study overseas. 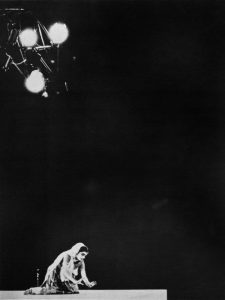 Composer and architect Iannis Xenakis had a prominent role, presenting Nuits,  about political prisoners; Persephassa, which linked the Greek goddess Persephone to Persian and other myths; and Polytope de Persépolis, according to its programme presenting the history of Iran, “elliptically and abstractly represented by means of clashes, explosions, continuities and underground currents of sound.” Some people felt that the last-named work mirrored the burning of Persepolis by Alexander the Great in 330 BC and went a little too far.

Xenakis (1922-2001) was born in Romania to a mother from Lemnos, and businessman father from Euboea, and settled in France. He was commissioned to design a $7m festival arts centre which was to continue the work of the festival year-round with cinema, theatre, ballet, and literature, but withdrew from the project when he admitted that he was “faced with inhuman and unnecessary police repression that the Shah and his government are inflicting on Iran’s youth.”

The Whitechapel display includes photos of a performance of Orghast, a play by Ted Hughes and Mahin Tajadod, co-directed by Peter Brook, Arby Ovanessian, Geoffrey Reeves and Andrei Serban in the ancient ruins; and of American choreographer Merce Cunningham’s dancers performing before the bas-reliefs of Persepolis.  Japanese artist Shuji Terayama performs vertically on the façade of a 19th century garden pavilion, and Ugandan playwright Robert Serumaga directs in a square in the bazaar at Shiraz.

Orghast Parts I & II, a play by Ted Hughes in collaboration with Mahin Tajadod, created by International Centre for Theatre Research, 1971 (Festival of Arts Commission and World Premiere).

In 1977, Ayatolah Ruhollah Khomeini chided fellow clerics from exile: “Indecent acts have taken place in Shiraz and it is said that such acts will soon be shown in Tehran too, and nobody says a word.” The Shah and his family went into exile the following year, ahead of the 1979 revolution, which ended support for contemporary arts

A series of events at the Whitechapel including talks and tours accompanies the exhibition. The project is supported by the Utopian Stage: Festival of the Arts Shiraz-Persepolis Exhibition Circle.