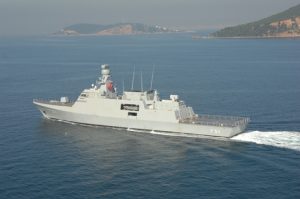 STM is the program manager for these new two ships, and will provide platform systems, construction materials, design services and the main propulsion systems, as well as integration of the propulsion system. In addition to the services provided to the Turkish Navy, STM has export responsibility of the MILGEM corvettes with the endorsement of the country’s Undersecretariat for Defence Industries (Savunma Sanayii Müsteşarlığı or SSM). In accordance with export targets, STM is expected to have further collaboration opportunities with GE Marine.

“We are delighted that the Turkish Navy has selected our popular LM2500 gas turbine to power the next two MILGEM corvettes, ” said Brien Bolsinger, Vice President, Marine Operations, GE Marine, Evendale, Ohio. “We also look forward to strengthening our many strategic in-country relationships to work together on naval ship programs in Turkey and throughout the globe, ” Bolsinger added.

The propulsion system for the two new MILGEM ships will be the same as sisters TCG Heybeliada (F-511) and TCG Büyükada (F-512), consisting of a LM2500 gas turbine in a combined diesel and gas turbine configuration with two diesel engines. Total propulsion power is 31, 000 kilowatts, allowing the ships to reach maximum speed in excess of 29 knots. The corvettes have an overall length of 99 meters with a displacement of 2, 300 tons.

The LM2500s for the MILGEM program are manufactured at GE’s Evendale facility near Cincinnati, Ohio. Tusas Engine Industries Inc. (TEI), a joint venture between GE and Turkish Aerospace Industries Inc., manufactures parts for LM2500 gas turbines as well as other GE Aviation engines at their facility in Eskisehir, Turkey.

The MILGEM program is managed by SSM, and similar to the first two ships, the Turkish Navy will undertake design and performance responsibilities for the new corvettes. The new MILGEM ships will be constructed at the Istanbul Naval Shipyard; GE will deliver the engines in 2015 and 2016.

About:
GE Marine is a GE Aviation business headquartered in Cincinnati, Ohio. GE Marine is one of the world’s leading manufacturers of marine products, systems and services, including aeroderivative gas turbines ranging from 6, 000 to 70, 275 shaft horsepower.