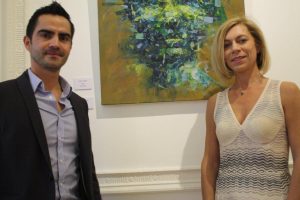 London’s diplomatic community was strongly represented at the major launch into the international art world of Colombian-born artist Dairo Vargas.

Four senior envoys and an array of other personalities from diplomatic, business and arts circles were among more than 200 people enthusing over Dairo’s work, which was magnificently displayed in the salon of the Colombian Consulate in the West End.

The setting allowed the hugely talented artist from a small town in South America to make maximum impact, following group and private shows in Europe and Latin America that put him on the right track earlier in his career. 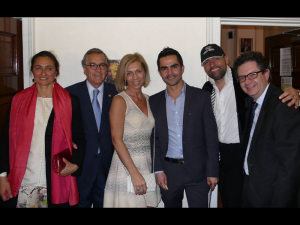 His collection of recent paintings, under the title Identities, was presented by Carola Syz Projects. The exhibition will run until May 14 2015.

On a grand scale, the artist raises questions about identity. His portraits feature imaginary presences with blurred features and ambiguous identities. The series was fashioned “during a period of intense personal transformation.” Acrylic on paper and canvas, the pieces are sensuous utterances that compel inspection from every angle.

Dairo has been collaborating with curator Carola Syz for the past year as his work has expanded to an ever more accomplished dimension and level.

Triptych from the series Identities.

The fire of inspiration flared last summer, as he started to produce the series Identities, “work which came right from within.” Dairo describes it as a cathartic phase in searching for his true identity. The strong portraits produced have been compared to ghosts arising from the subconscious mind, as his identities glow though the different psyches he has symbolically interpreted.

Like an actor changing roles and personalities, said Carola, the artist traversed layers of his conscious and unconscious mind. 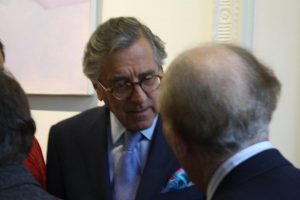 Through the individualities he generates in ethereal images, he expresses his own emotions on canvas.

It is a path which some of the most sensitive creative souls have explored in different ways: at an extreme level one is reminded of the Portuguese essayist and poet Fernando Pessoa (1888-1935) who adapted some 70 literary personae, although deliberately rather than unconsciously, and albeit his prolific output was rather too disordered for some critics.

Dairo’s portraits have been paired up into male and female, thus representing the feminine side and the masculine side of personality, in this case of the different identities the artist sought to depict. The form of the subjects themselves appears dishevelled but at the same time compelling to the viewer as they grasp towards a more noble, defined shape, and stretch to within reach of reality. 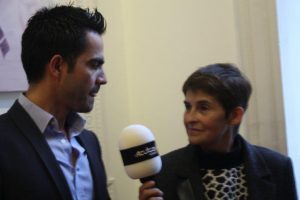 Dairo Vargas, who was born in the small municipality (population a little over 4, 000) of El Agrado in the Colombian department of Huila, some four hours’ travel from Bogotá, is a graduate of Kensington & Chelsea College of Art and has been working as a graphic designer in London.

The exhibition was supported by the Embassy and the Consulate of Colombia in London, and guests at the private view enjoyed cocktails sponsored by Fernet Branca.

Ambassador Nestor Osorio, who hails from Bogotá, has been representing Colombia abroad for many years. He is a former head of the International Coffee Organization, ambassador to the United Nations and president of the UN Economic and Social Council. He handed his letter of credence to the Queen in at Buckingham Palace in May 2014. 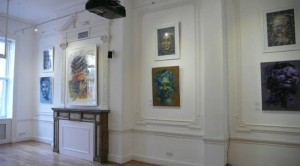 Identities, paintings by Dairo Vargas, is at the Colombian Consulate, 35 Portland Place, London W1, until May 14from 9am-1pm and 3pm- 5pm Monday to Friday.

IMCA publishes guidance on the use of simulators