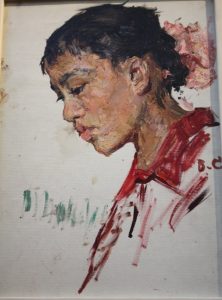 A Girl from Tuva on the Volga. 1969. Oil on board. By Valentina Savelieva.

Russia’s veteran artists are (re)discovered on the London and international scene,  By James Brewer

Gradually, a series of remarkable Russian artists are becoming known far beyond the country’s borders.

Reaching artistic maturity within the Soviet Union in the 1950s and 1960s, some already have an international reputation, and others have become clearly repositioned as a focus of wider interest. Several continue to produce their remarkable oeuvre and to teach a new generation who are making their names conscious of the heritage in the once dominant artists’ unions.

One such gifted practitioner is Valentina Savelieva of the St Petersburg Union of Artists. Ms Savelieva is “one of the best artists I have ever met, ” says John Barkes, an experienced British dealer who specialises in the period and who at the Decorative Antiques & Textiles Fair at Battersea Park Spring 2015 edition showed a range of works originating from top Russian academies and artists’ schools. Dr Barkes takes a particular interest in the output of the studios of artists’ unions in St Petersburg, Yalta and Siberia, in addition to selected Western European art. 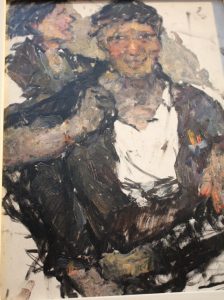 One of the Workers. 1968. Oil on board. By Valentina Savelieva.

Valentina Savelieva, born in 1938 into a family which included a fashion designer, studied between 1953 and 1958 in the Tavrichesky College of Art. At the illustrious Ilya Repin State Academic Institute of Fine Arts, Sculpture & Architecture, which she entered in 1958, she was a favourite pupil of the legendary teacher Viktor Oreshnikov. Her academy professors not only admired her proficiency but frequently asked her to model for them.

Professor Oreshnikov’s flamboyant portrait of Valentina Savelieva is held in the Repin Academy’s collection. There is a portrait, oil on canvas, of Valentina in her early twenties, by her art college friend Zoya Molodzhenina,

Sailor. 1967. Oil on board. By Valentina Savelieva.

Ms Savelieva worked for a year in the Artists’ Union in Krasnoyarsk, Siberia’s third largest city, before returning to the Repin Academy and gaining a prize which enabled her to make a work and study trip to Italy. From 1967 she was a popular choice for exhibitions in the Soviet Union, and over the years her paintings were bought by private collectors in Russia, France, the UK, the Netherlands, the US, China and Australia.

She is noted for her many touching portraits in clear sympathy with her subjects – examples being Sailor,  One of the Workers, and A Girl from Tuva on the Volga. All are oil on board and were produced in 1967, 1968 and 1969 respectively.

Another Leningrader, 10 years younger, is Tatiana Solovyeva. From the age of 11, talented pupils to this day have the option of applying to schools with specialist courses, such as languages, science, music and art, and such was Tatiana’s path. After their degree course, the brightest and best go on to post-graduate studies at atelier-style academies.

Valentina Savelieva, drawing by her friend Irena Getmanskaya at the Repin Academy, 1964.

Ms Solovyeva studied with the distinguished Professor Alexander Zaitsev at the Repin Academy from 1968-74, and as a member of the St Petersburg Union of Artists has for many years taught at the Repin Art School.

Dr Barkes bought several paintings from her some 15 years ago, and was happy to see her again on a recent visit, when he collected more. One of the pieces on show at Battersea was executive in 1976 and entitled Brand New Lada, a reference to the popularity of the Fiat-style car mass produced by a factory on the banks of the Volga from the 1960s. A bright red Lada stands out conspicuously in an otherwise humdrum small town, but residents seem to have become accustomed to its presence and go about their business quietly.

Summer, Sebastopol. 1965. Oil on board. By Valentin Bernadski.

In a Repin Academy Study by Tatiana Solovyeva, a peasant woman who might be in early middle age but must have lived through hard times, seems stoic as she poses for her portrait.

Galina Mischchenko, who works with Tatiana, was represented in the latest show by a 1973 oil on board,  Students of the Ceramics Department, and from the following year, a Self Portrait. 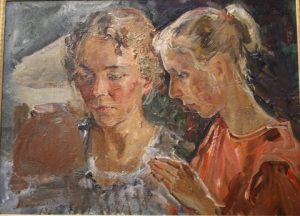 Students of the Ceramics Department. 1973. Oil on board. By Galina Mischchenko.

An outdoor representation engendering tranquility is entitled Summer, Sebastopol, 1965. Those were the days when Sebastopol was a closed city as home to the Russian Black Sea fleet, while functioning as a seaside resort for the Soviet population. The painting, oil on board, is by Valentin Bernadski (1917-2011). Having survived World War II in which he was a partisan, he worked as a member of Simferopol Union of Artists.

Self Portrait. 1974. By Galina Mischchenko.

In all this exceptional body of work, there is a luminous quality that may surprise many Westerners who were for years dismissive of ‘Soviet art.’  The fact is that artists such as Valentina Savelieva and Tatiana Solovyeva were delving into the well of the finest qualities of the human spirit which appeared to others hidden behind the rigours of daily life.  They were doing this even in the dimmest and grimmest of years.

Although it accorded with official ideology to champion the common people, one can always sense the empathy of the artist to their models. Ms Savelieva and Ms Solovyeva are among the finest examples of this genre. Their total dedication to their art is shown by their determination to pass on their example to succeeding generations, as part of a loyalty that has kept the Repin Academy and other institutions at the forefront of the Russian cultural tradition. 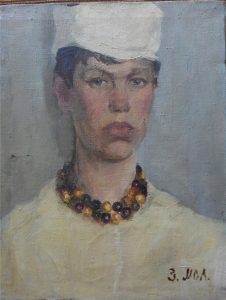 Valentina Savaliera in her early twenties. Oil on canvas. by Zoya Molodzhenina

Their kind of art was thrown ‘out of fashion’ when the structures of the Soviet Union were swept away, and some artists lost their privileges, such as they were. Dr Barkes was one of relatively few people in the West who at an early stage saw that this rich seam could continue to be mined, and that it could bring both extra income and a new source of pride in their achievements to some of those who were members of the artists’ unions.

Dr Barkes can be contacted via www.lacygallery.co.uk