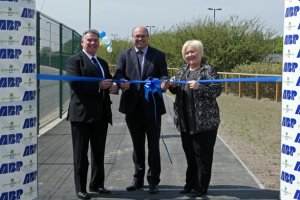 A new footpath and cycle route that will give members of the public the opportunity to see developments on Hull’s Alexandra Dock take shape, has been officially opened today (15th May).

The three-kilometre pathway represents an investment of £2 million and is the first element of the Green Port Hull development on Alexandra Dock, to be opened.

The footpath, which now forms part of the Trans Pennine Trail, will carry the re-routed Public Right of Way from the river front to enable construction of the Siemens facility which forms part of the wider Green Port Hull project. The pathway will give walkers and cyclists the opportunity to travel from Victoria Dock around the outer perimeter of Alexandra Dock uninterrupted, giving unrivalled views over the site as the Siemens development takes shape.

The walkway has been built by CR Reynolds of North Ferriby on behalf of Associated British Ports, which is investing £150 million in providing marine berths for offshore wind turbine installation vessels and preparing the site for Siemens to begin construction of its blade factory, service buildings and offices.

This work involves demolition of existing buildings, infilling 16-acres of the dock with around one million cubic metres of sand from the Estuary, as well as construction of quay walls and three new berths.

ABP Head of Projects Simon Brett believes the opening of the footpath and cycleway represents a significant milestone in the development of the site and a major success for collaborative working with local residents, businesses and consultation groups.

He said: “Today sees the completion of a crucial part of the redevelopment of Alexandra Dock. As part of the construction work we had to close the established public right of way, which was used and enjoyed by many people, so to be able to open this new route is fantastic.

“We very much appreciate the input we’ve had from so many different parties, which has helped to create such an interesting and varied route. These have included ramblers and cyclists through to schools and the local art college. All have played their part in creating this great new footpath.

“The pathway will give walkers and cyclists front-row seats as the site develops, and the landscaping, lighting and seating schemes, artwork and information boards that are to be installed over the next year will also make it an informative, interactive experience. We’re looking forward to seeing members of the local community use and enjoy this new facility.”

More than 90 trees and around 26, 000 plants have been used in the landscaping of the footpath. Artwork created by students from Hull School of Art & Design will be used to line the walkway. Exhibition panels designed by local schools will also be erected and ABP itself together with help from local historians will also place information boards at strategic points along the walkway, giving a potted history of the dock and details of its future as vital link in the renewable energy supply chain.

Leader of Hull City Council, Councillor Stephen Brady said: “We welcome the opening of this footpath which will provide a key walking and cycling route for residents and visitors of the city.

“The diversion of the original footpath will be critical to the investment and business in the area and will prove to be an invaluable asset to the city’s public right of way network.

“Green Port Hull is one of the most significant developments in our city promising long-term future prosperity ensuring Hull is at the heart of the advancing renewable energy sector.”

The Siemens facility is due to become fully operational in early 2017.