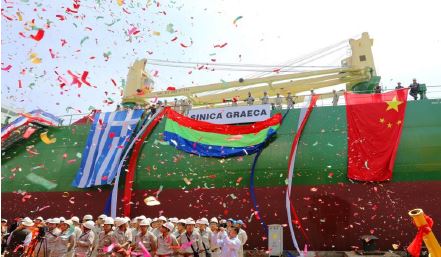 On Thursday, 14 May 2015, the Naming Ceremony of the new building ship, Ultramax Bulk Carrier “Sinica Graeca”, 63.270 dwt, was held at Dayang Shipyard of Sinopacific Shipbuilding Group Co. Ltd. The construction was supervised by Lloyd’s Register of Shipping and the vessel is managed by Angelakos (Hellas) S.A., Athens.

The Godmother of the vessel was Madame Grace Yang, who broke the bottle of champagne and gave her the name “Sinica Graeca”, wishing her and her crew to have God’s blessings. The Vice Mayor of Yangzhou City, Mrs. Zhang Bao Juan attended the ceremony, along with representatives from classification societies, supervisors of other shipping companies, etc., in order to wish “Sinica Graeca” and her crew calm seas.

The President of Sinopacific, Mr. Simon Liang, stated that their company cherishes detail and he is proud, because “Sinica Graeca” is an example of what people, who desire to do great things, can achieve when they join forces and have a professional and positive attitude towards work and cooperation.

Mr. Evangelos El. Angelakos referred to the commercial relations between Greeks and Chinese since ancient times and he said that trade and commerce contribute to the financial growth of societies. He also noted that seafarers and all who work in international shipping, they too are bearers and conveyors of culture. He also pointed out that the first map reference to China was done by the Greek geographer Ptolemy, over eighteen centuries ago. Finally, he pointed out that the name “Sinica Graeca” reflects the respect and appreciation of Angelakos (Hellas) S.A. to the great culture of China and that, in a way, this vessel will be an ambassador-at-large of Greece and China around the world.

After the revealing of the name, an Orthodox priest performed the Blessing of the ship at the bridge and later on the Shipyard held a lunch in honour of the guests.