Photographer Caroline Gavazzi’s exhibition CHIARO/SCURO at the Italian Embassy in London casts intiguing light on the city of Milan,  By James Brewer

Viewed through its many dualities, Milan is an intensely animated yet spiritual metropolis. A native of the city who now lives in London, freelance photographer Caroline Gavazzi, has captured its warmth, dignity and iconography in her images which have gone on show in the appropriate setting of the Italian Embassy in Mayfair.

The Embassy’s representation, headed by Ambassador Pasquale Terracciano, was out in force at the private view of Caroline’s exhibition to congratulate her on her series entitled CHIARO/SCURO, which is presented by Carola Syz Projects. 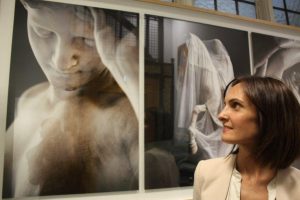 Chiaroscuro, written as a single word, derives from the Italian term for the contrast of light and dark in paintings, but Caroline has chosen in this instance to refine the difference to call up that side of Milan which does not “show off” its own qualities, the scuro (dark) hidden behind the chiaro (light). She unveils often unacknowledged aspects of the anatomy of this cosmopolitan city of 1.3m people. Collating the acuity of light and dark, Caroline conjures images of beauty, whether of the gorgeous heritage of the city’s treasure, or honed from the quotidian life of passers-by.

Caroline left Italy’s second largest city when she was 19 but it holds a fascination for her. She thus has what she calls a “distant” but at the same time very “familiar” eye.

Her perspective as both outsider and insider sharpens her focus on what she feels makes Milan unique, from its prestigious past, its dynamic present and its future development. For instance, she shows in the same photo people shopping and tourists admiring the town but also “watching it from a distance.”

In the image Close to Distance we have people talking on the phone, but reduced to ciphers amid the grandeur of blinding light and deep shade. 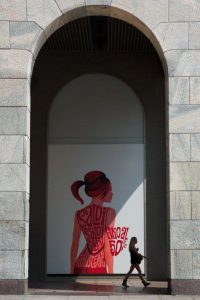 Caroline has been one of 12 photographers participating in the project L’Accademia dei 5 Sensi (Academy of the Five Senses). The project was organised by Fondazione Serbelloni, a private foundation promoting art and culture, in collaboration with AFIP CNA (Associazione Fotografi Professionisti aderente CNA Professioni) and master-minded by the foundation president Giovanni Gastel, a prominent fashion photographer. CHIARO/SCURO was based on photographs taken in July 2013 and exhibited in May 2014 at Palazzo Serbelloni, the headquarters of the foundation. 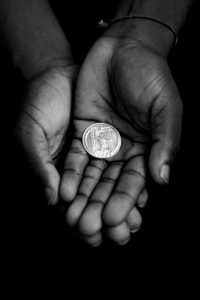 From the triptych Light of Hope. By Caroline Gavazzi.

In her contribution to the series, Caroline draws on the majestic aura of that neoclassical palace originally constructed for the military lord Gabrio Serbelloni (1509 – 1580). The palace, occupied for three months in 1796 by Napoleon and Josephine, was restored after severe damage from air raids in 1943.

Caroline, in a triptych, Light of Hope, illustrates the three subjects assigned for the project: the city of Milan, its people, and the Palazzo Serbelloni. Exactly in the centre, the dark hands of an immigrant – the Italian word ‘extracomunitario’ signifies the artificial separateness of such people – hold the small medal of the Ambrogino d’Oro. The medal, says Caroline, represents the generosity of the city: named after Saint Ambrose, the patron saint of the city, it is an award given each year by the municipality to 30 people or associations who have contributed great deeds to the city. 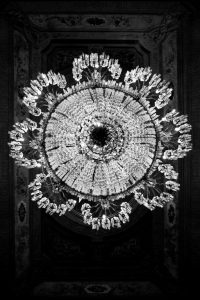 One of the triptych Light of Hope. By Caroline Gavazzi.

Caroline’s image of the medal puts it into the context of a city which is open to foreigners and to poor people, and represents the quiet assistance of citizens to people in need. On either side of the image are photographs of two chandeliers: on the left the (“extremely beautiful, ” says Caroline) fixture from the magnificent palace and on the right from the renowned Teatro alla La Scala. The opera house is a symbol of “history, music, colour, beauty, ” emphasises Caroline.

Reinforcing the theme of the generosity of the city, the two chandeliers – givers of light – are seen as illuminating the benevolence that distinguished the aristocracy and middle class of the city in the past, “and which is still alive in the hearts and minds of people today.”

Throughout the project, “I wanted to focus on the fact Milan is the town you can see but there is a lot you cannot see.” Caroline perceives the city as “extremely humble, but doing incredible things.”

Those great things include a packed programme of events in 2015: art fairs, music, culture, culinary displays, celebrations of Leonard da Vinci, and Expo which opened on May 1 and will continue until the end of October. Expo covers a 1m sq m exhibition site and is expected to welcome 20m visitors to pavilions from 140 participating countries celebrating the main topic, Feeding the Planet, Energy for Life. The Museum of the Palazzo Reale is midway through what the curators call “the largest da Vinci exhibition ever organised in Italy.” Leonardo served at the court of Ludovico Sforza in Milan for 16 years. 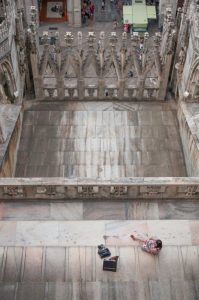 Born in Monza, Caroline early in her career was a picture co-ordinator in the artistic department of Vogue UK, and picture editor for Harvey Nichols magazine, before turning freelance in 1998. She especially is drawn to photographing the objects of daily life.

Guests at the preview enjoyed fine wines offered by Andrea Chiumiento of Casa Vinicola Zonin, which has its UK office at Richmond-on-Thames (www.zonin.co.uk)