Some people hitch their way around India. Harriet Riddell has stitched her way across a land that is a dazzling patchwork of colour, noise and frenetic movement. Her passport to getting closer to people and places is her trusty Janome sewing machine, a pioneer brand for multi-coloured embroidery, with which she creates art works on the spot, qualifying her for a rare calling – that of textile performance artist.

She has been telling her story to accompany an exhibition of her works, which are rendered on any fabric that happens to come her way, at the Nehru Centre in Mayfair, London. Visitors have been following the exciting threads of her story, and from May 19 to 22 2015 she has been there stitching portraits to order (this time with a Husqvarna Viking). Copies of her book InStitchYou India, which relates with copious illustrations the weave of her adventures to date, have been snapped up.

Harriet expresses her remarkable draughtsmanship through rapid freehand stitch the minute she sets up her just-about portable machine close to tourist attractions, and in markets, villages and many other locations. Her insignia, InStitchYou, is a clever adaptation of the phrase ‘in situ’ which means “situated in the original, natural, or existing place.”

This is because she wants to record the moment of her appearance upon a scene including conversations, banter and materials to hand, interacting with often bemused spectators in both teeming and remote locations. “I believe this absorbs life into the stitched lines, ” she has written on her website where she documents her discoveries. “Stitching portraits and scenarios in public places challenges our expectations and perceptions.” 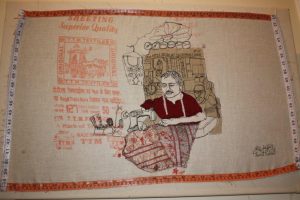 Machine embroidery in the market. By Harriet Riddell.

She has to carry with her more than just a sewing machine. She needs a table, chair, and fabric, and bicycle batteries to ensure there is power for her equipment. She has stitched on moving trucks, on bridges, behind the Taj Mahal, and in the Himalayas.

When she set up her machine at 6am outside the Taj Mahal, a short time later the guards asked her to move on.  A young boy passing by invited her to go with him to his village, from where she could see the marble mausoleum distantly. That is how village people, cattle and washing line come to be in her picture of the famed monument.

Sometimes the running stitch she uses is an apt description for an episode. Her piece entitled Follow that Fellow is a record of her climbing on top of a cart so that she could be pushed along the lane behind several other moving conveyances that she wanted to depict.

In Machine Embroidery in the Market she stitched head and shoulders of a professional machine embroiderer who was opposite her – and used an old tape measure to frame her picture.

Old Wooden-Framed House has the commentary: “The lady took me to her home in the mountains.  On the way, she swapped our bags, and the elderly lady carried my sewing machine through the Himalayas.” 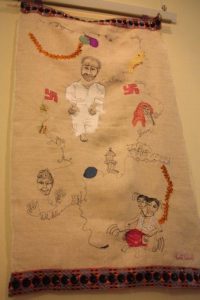 Of Tea Pickers, she says: “The ladies looked so graceful in their pearls and lipstick as they collected the tea in the mountains.” 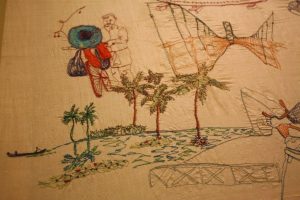 One of her trips to India, from coast to coast, is shown in multiple cameos as part of the large tapestry entitled Dave’s South India Bicycle Adventure. This refers to David Trattles, a photojournalist and tour organiser she met who invited her to join his 17-day pedalling excursion across the south of the country from Chennai to Cochin. Harriet added her original touch by bringing in tow her sewing machine, along the way collecting enormous amounts more ‘material’ to weave into her material…

Toronto-based David Trattles has a similar mission in life to Harriet – he has worked as a social documentary photographer for 20 years, during which he has recorded and presented stories for outlets including CBC, Canadian Geographic, Elle, Macleans, National Library and Archives Canada. He says that while he has cycled through 60 countries, his favourite destination is… India.

Nehru Centre director Sangeeta Bahadur, who was accompanied by deputy director Vibha Mehdiretta, had high praise for Harriet. Ms Bahadur said that the subject of the exhibition was “very close to my heart.” To accomplish work of the quality shown by Harriet “requires not just a brilliant imagination, but quick fingers and a facility with the sewing machine, ” she said. “Many of the works here are street scenes.  She captures on a piece of cloth what she sees around her. She takes a living scenario and creates a still-life out of that. She loves the interaction as she builds her still-life.”

Harriet dressed for the occasion in an elegant, bordered pure cotton sari designed by a friend with whom she has collaborated, Aneeth Arora who markets her Péro label which uses local materials and skills. Péro means ‘to wear’ in Marwari, the language of Rajasthan. 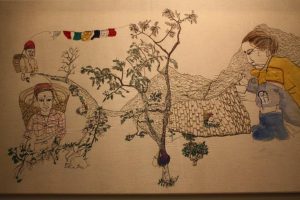 Born in 1990, Harriet took an early interest in sewing: her paternal grandmother was a textile artist. Taking a mixed media art course, Harriet graduated from the University of Hertfordshire with first class honours in Contemporary Applied Arts. When she saw an exhibition called Lost in Lace, contemporary ideas of what can be done with lace, she went home to doodle with the sewing machine, and then use it to draw models from her life class, where her teacher Michael Wright was a great inspiration. She had immediately found her métier. 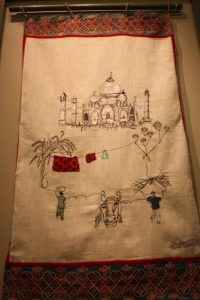 Taj Mahal from a village viewpoint. By Harriet Riddell.

“I was working in a nursing home and stitched portraits of the residents. I spent time at Greenwich market stitching portraits until I had made enough money to go to India. I had wanted to go to India since I was 10 years old, watching [the film] A Little Princess. I had made papier-mâché models of Ganesh and other Indian deities. When at last I flew to New Delhi and saw from the plane the tops of the temples, I was crying.”

Harriet says that “the best sewers are the worst stitchers” because they are so used to straight lines. 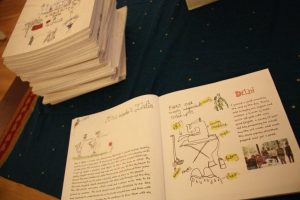 In addition to several shows, Harriet undertook projects for Pentland plc, which has sports, outdoor and fashion brands, for its offices in London and in Hong Kong. In the Asian city, she took her sewing machine to harbours, shoe factories and places of nature, recording what she saw to be framed in the company’s refurbished Hong Kong offices.
In June 2015 she is due to tour with a bicycle-powered sewing machine – members of the public sit on the bike and pedal to create the electricity – and in November she will return to India for a fourth trip…

Piraeus, Greece: The “Quantum of the Seas” making waves

Thrilled to read of your adventures.
I just can’t tell you how much I admire you.
See you next time you’re in Toronto
Take care
Jane