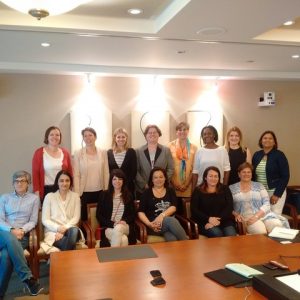 Presidents and representatives of WISTA USA Chapters as well as other National WISTA Associations (NWAs) from across the globe attended with great interest, the WISTA USA 2015 Annual General Meeting & Conference which was held this year in New York on 15 May 2015.

The topics that were discussed at the Conference concentrated on the current emerging challenges of the Shipping industry. Among others, there were discussions on:
 The current price of crude oil and its impact on the Shipping industry,
 Cybersecurity with regard to issues within the marine transportations systems and the role of the Coast Guard response,
 The emerging challenges that shipping is facing with particular mention on regulatory issues and owners’ perspective on shipbuilding projects and operations. Special reference was made by Joseph Hughes, Chairman and CEO of The American Club, to the P&I insurance response to these challenges.

WISTA USA also reviewed at length the multitude of activities of the past year and geared towards promoting WISTA goals.
The Vice President of WISTA Hellas and Managing Director of Piraeus office for Managers of The American Club, Dorothea Ioannou, being the liaising partner, informed the membership on the European Maritime Day 2015. The Conference is taking place this year in Greece and WISTA Hellas is one of the official supporting organizations. The Conference will focus on European ports and coasts as engines for Blue Growth in the European Maritime Industry along with public happenings and networking events with the support of the Greek maritime community.