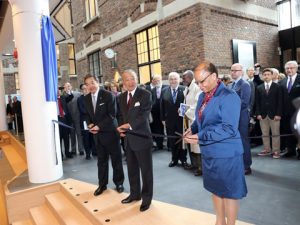 Expanded, state-of-the-art, premises for the World Maritime University (WMU) were inaugurated on Tuesday (19 May 2015) in Malmö, Sweden, by IMO Secretary-General and WMU Chancellor Koji Sekimizu.  WMU is an international educational institute for the maritime community, operating under the auspices of IMO.

At close to 6, 000m2, the new facility is nearly double the size of the previous Malmö campus. It provides a new auditorium, multiple research laboratories, seminar rooms, and video-conferencing capabilities for hosting international conferences. An integrated information system embracing unified communications, broadcast media and information management systems for teaching, video-conferencing, research, and management is a central feature of the new site.
The new premises are centred on the refurbished historic Malmö Harbour Master’s Building, with dramatic additions designed by the renowned Danish architect Kim Utzon in collaboration with Australian architect Tyrone James Cobcroft of Cobcroft Architects.
The City of Malmö has generously funded the infrastructure while the up-to-date fittings have been provided through significant donor support. Donors include The Nippon Foundation, the China Classification Society, DNV GL Maritime, the Nakashima Propeller Co. Ltd, Hyundai Glovis, Dr. Peter and Jane Muirhead, the Korean Shipowners’ Association, the Korean Registry, the Government of Germany, Shindong Digitech Co. Ltd, Dr. Binali Yildirim, Paul’s Fine Art and Antiques, Nova Marine Carriers, Simsekler Group of Companies Ship Recycling and Ship Chandlers and AVS Global.
Speaking at the launch of the new facility, Mr Sekimizu said, “Today, after more than three decades of increased growth and activity, WMU has outgrown its first home in which it had welcomed its very first students, back in 1983. The new premises mark a historical milestone in the relations between Malmö and the University and will provide the forum for the University to continue growing and meeting the educational needs of the maritime sector.”
Founded in 1983 by IMO, WMU offers M.Sc. and Ph.D. programs, postgraduate diplomas, and Professional Development Courses. A total of 3, 293 students from 165 countries have graduated from WMU to date.
Mr. Sekimizu was joined at the inauguration of the new premises by Dr. Yohei Sasakawa, Chairman of The Nippon Foundation (see separate press briefing to follow); Mr. Vladimir Ryabinin, Executive Secretary of the Intergovernmental Oceanographic Commission and Assistant Director General of UNESCO, who spoke on behalf of United Nations Secretary-General Ban Ki-moon; Mr. Erik Bromander, State Secretary to the Minister for Infrastructure in Sweden’s Ministry for Enterprise and Innovation;  Ms. Katrin Stjernfeldt-Jammeh, Chairman of the Malmö City Executive Board; Ms. Ida Skard, Director General, Maritime Department, Norwegian Ministry of Trade, Industry and Fisheries who pledged, on behalf of the Norwegian Government, 4.5 million Norwegian kronor for the support of student fellowships in both 2015 and in 2016; Dr. Ismail Abdel Ghaffar, President, Arab Academy for Science, Technology and Maritime Transport (AASTMT), who spoke on behalf of H.E. Mr. Hany Dahy, Minister of Transport, Egypt; and WMU President Designate Dr. Cleopatra Doumbia-Henry, who takes up her position in July 2015.
Mr. Sekimizu thanked all donors and supporters of the WMU, past and present, paying particular tribute to its founder, former IMO Secretary-General, Dr. CP Srivastava.
“This innovative and indeed unique academic institution is a lasting testament to Dr. Srivastava, the Founding Chancellor of this University, who worked tirelessly in collaboration with the Government of Sweden to find a home for, and to establish WMU. To this day, there is no other maritime institution that serves the world in this way, and especially the developing countries, by educating maritime leaders and high level managers of the future, and I wish to pay tribute to Dr. Srivastava for his foresight and determination in founding this august institution, ” Mr. Sekimizu said.
Mr. Vladimir Ryabinin, speaking on behalf of Mr Ban, said the WMU provided education, research and capacity building for the maritime and shipping sectors, supporting students, particularly from developing countries, to boost their knowledge while experiencing the UN ideals in their daily activities: living together, studying together, and learning from each other culturally.
“Let me wish the faculty and all the students – present and future – success, happiness and fulfilment in these wonderful new academic facilities, which will enable the World Maritime University’s to make an even stronger contribution in the years ahead to the welfare of society, the protection, preservation and wise management of the oceans and for the achievement of the emerging post-2015 development agenda, ” Mr. Ryabinin said.
Looking ahead, Mr. Sekimizu said the University’s growth over the coming decades would be shaped by the evolving context of the shipping industry, in correlation with IMO’s technical cooperation programme, while eight new strategic directions, outlined in a study for the financial sustainability of the university, would be key to its growth. The study was approved by the WMU Governing Board on Monday (18 May) and identifies measures to strengthen WMU’s financial sustainability. The strategic directions are:
1. Educate and foster the growth of maritime leaders in both developing and developed countries as a core mission of WMU;
2. Teach policy to future maritime leaders;
3. Expand the WMU scope to include ocean-related matters;
4. Strengthen the University research function for maritime and ocean policy and related subjects;
5. Explore diversified activities for generating revenues;
6. Review the current arrangement with other universities and explore new ways of collaboration;
7. Explore further collaboration with IMO in particular in the field of technical cooperation; and
8. Establish an endowment fund.
Photos of the inauguration can be found here​.
International Maritime & Oceans Education & Training Symposium
Following the inauguration, a symposium entitled International Maritime & Oceans Education & Training was held at the new WMU premises on the afternoon of Tuesday 19th May and on Wednesday 20 May.  The symposium provided a forum to discuss contemporary challenges for the maritime community, scenarios for the future, and optimum responses for all sectors of the industry, setting the agenda for research, for discourse in the maritime community and for debating the issues underpinning the sustainable use of the maritime world. Further information can be found at http://www.wmu.se/events/international-met-symposium-2015.