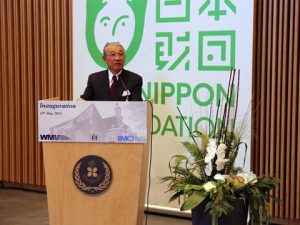 Nippon Foundation Chairman Mr Yohei Sasakawa, speaking at the inauguration of new WMU premises, said the foundation was prepared to set up a special endowment fund worth US$100 million to support the University​.

The Nippon Foundation, a Japanese philanthropic organization that promotes social innovation, has said it is willing to establish a US$100 million endowment fund to support expansive and innovative activities at the World Maritime University (WMU).

Based in Malmo, Sweden, the WMU is a postgraduate maritime university founded by the International Maritime Organization (IMO) in 1983 as a centre of excellence for maritime post-graduate education and research. Speaking at the inauguration of a new campus for the University (on Tuesday 19 May), Nippon Foundation Chairman Mr Yohei Sasakawa announced the foundation was prepared to set up a special endowment fund worth US$100 million. He said the fund would be to support the University to establish itself as “an ocean and maritime research institution engaged in multi-disciplinary scientific research in the marine field, and an educational institution that generates human resources who have the capacity to address ocean issues with a multi-disciplinary approach.
The Nippon Foundation is a long-standing supporter of the WMU and Mr Sasakawa also pledged a further US$3 million per annum for ten years to continue its existing student fellowship programme and enhance the Nippon Foundation Chair.
Mr Sasakawa’s pledge came following the recent decision of the WMU Board of Governors to approve a study for the financial sustainability of the university which identified 8 strategic directions that would be key to the institution’s sustainability and future growth (See IMO Briefing.20/2015)​. They include:
• expansion of the WMU scope to include ocean-related matters, and the establishment of a Maritime and Ocean Policy Research Institute within WMU; and
• establishment of an endowment fund
Mr Sasakawa voiced his support for an expanded ocean-related agenda for WMU, stating “It is my wish for WMU to keep moving forward to establish itself as an educational and research institution that can address ocean issues from not just the maritime but the greater oceanic field.”
Mr Koji Sekimizu, Secretary-General of the IMO and Chancellor of WMU expressed his deepest thanks to Mr Sasakawa and the Nippon Foundation for this historic pledge.  “Mr Sasakawa’s vision for WMU is completely in line with the eight strategic directions recently adopted by the WMU Board of Governors. The oceans and the shipping industry, both so vital to the future of mankind, must have leaders that are very well versed in ocean policy matters and can take a global view of the oceans and shipping.  WMU will provide those leaders, and the pledge made by the Nippon Foundation today is a major step forward in achieving the expansive and innovative strategic directions adopted by the Board of Governors.”
Background information
The Nippon Foundation​, aims, through social innovation to achieve a society where all people support one another, reducing the burdens and challenges they face together.
The maritime world is one of several fields of activity for the foundation, in which it works to protect the oceans and keep the seas safe while helping people to experience and learn more about the oceans and ships and enhance human resources in maritime fields.
The Nippon Foundation, through the Ocean Policy Research Foundation, is the largest fellowship donor to the University, providing 22-25 new awards annually. In addition, since 1993 The Nippon Foundation has hosted a week-long field study to Japan for Sasakawa Fellowship Students and, since 2001, has regularly hosted Sasakawa Fellow gatherings.
The total number of WMU Sasakawa Fellows is currently 543, and there are 22 Sasakawa Fellowship Students in the Class of 2015.
Aside from its support for students, The Nippon Foundation further supports the capacity- building mission of WMU by sponsoring three Professorial Chairs and an Assistant Professor. In addition, the Foundation provides support for numerous conferences and events connected with WMU.
The Nippon Foundation’s contributions to WMU began in 1987 with a US$1 million fund to provide fellowships for WMU students from Asia and Africa. The following year, the Foundation utilized the fund to establish the WMU Sasakawa Fellowship Program and began awarding fellowships to WMU students to support the development of personnel in the international maritime community. An additional fund worth US$4 million was instituted in 1991 in response to a request from IMO and the Japanese Ministry of Transport and initially administered by the Sasakawa Peace Foundation under the auspices of The Nippon Foundation. The recipients of The Nippon Foundation’s WMU fellowships became known as Sasakawa Fellows.