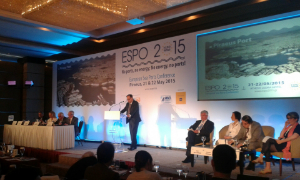 Knut Fleckenstein at the podium

This morning, the port industry discussed the state of play of the port regulation with Parliament and Commission. One year after EU elections, work seems to move forward with the new Transport Committee. In the debate held at the ESPO conference this morning, all speakers – Commission, Members of the EU Parliament and ports – generally expressed the wish to find an agreement on the text of the port regulation.

As rapporteur on the port regulation,  Mr Fleckenstein (SD, Germany) outlined the main elements of his draft report, published today. He confirmed his position in favour of more autonomy for ports and stressed the importance of transparency in the public funding of ports. He also wants to ensure that a complaint mechanism exists for port users when necessary.

In addition, he highlighted the new elements in his report, in particular the deletion of the market access provisions and instead pleaded for flexible organisation models. He further emphasized the close connection between the port regulation and clear rules on state aid for ports. Therefore, no concrete date has been set for the vote of the report, since this will depend on the progress on the state aid discussions. Moreover, he asked to include ports into the general block exemption regulation and stated that introducing a simple threshold for investments would not be enough.

Fotis Karamitsos, Acting Deputy Director-General at DG MOVE, presented the importance of having the regulation and said in that respect: “Don’t let the courts make the policy for you!”. Mr Karamitsos further expressed his support for the Council approach but pleaded for restoring the autonomy on ports charging as proposed by the Commission. He also said that transparency is a pre-condition for more clarity on state aid.

Elissavet Vozemberg (EPP, Greece) shadow rapporteur for the port regulation, pleaded for a European framework for market access for port services and for financial transparency in ports. On the latter, she asked to exempt small ports. She also called for more autonomy for the ports.

Miltiadis Kyrkos (SD, Greece), member of the Transport Committee, stressed the need for a “contemporary” framework for ports and added that transparency in the use of public funding is paramount for fair competition.

“The debate of this morning has shown willingness to land with a port regulation. It is clear that all positions are not set yet and more work will be needed to come to a realistic compromise. ESPO will continue its constructive dialogue with the rapporteur and shadow rapporteurs. Moreover, we are happy to see that the autonomy principle is broadly supported by the Commission and Parliament”, said Isabelle Ryckbost, ESPO Secretary General.

Looking back at the whole conference, ESPO Chairman Santiago Garcia-Milà said: “With nearly 300 participants, I believe we can consider this conference as a successful event. The conference proved that energy should be high on the ports’ agenda. In that respect, we hope that the Commission will respond positively to our request to facilitate the energy-related investment in ports and that ports serve as important interlocutors when discussing energy policy.”

The European policy debate marked the end of the 2-days ESPO conference that took place in Athens and that was amazingly hosted by the port of Piraeus. All presentations are available on the ESPO website.
The next edition of the ESPO annual conference will take place in Dublin in May 2016.