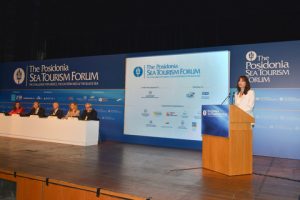 Elena Kountoura at the podium

The 3rd Posidonia Sea Tourism Forum opened its doors today in Athens to welcome 800 stakeholders from the global cruising and yachting sectors for a two-day forum to discuss a range of issues pertaining to current challenges and future potential of sea tourism in Greece and the Eastern Mediterranean.

Elena Kountoura, Alternate Minister for Tourism, opened the forum with a short key note speech highlighting the significant role sea tourism plays for the economic development of Greece. “Tourism in general contributes 20% of the country’s GDP and contributes 750, 000 direct and indirect jobs. We are aiming at prolonging the tourism season in Greece and the cruise sector is a key pillar of our national tourism strategy.

“Our main priority is to attract investments that create jobs for the economic development of local communities. The Greek archipelago is the ideal cruise canvas due to the oversupply of port destinations, steeped in history and culture that give Greece an unparalleled competitive advantage that we must harness to our advantage.

“We are heavily investing in sea tourism and according to various industry sources, the signs for 2015 are very positive as a few of Greece’s ports are amongst the most popular in Europe amongst international cruise operators.”

Greek Alternate Minister for Maritime Affairs, Theodoros Dritsas, said that the creation of the National Coordination Committee for Cruising Affairs will be launched in a few days during a crucial juncture for the Greek economy. “This committee will play a vital role towards the improvement of infrastructure and regulatory framework which are required in order to help us upgrade our sea tourism product.”

According to Pierfrancesco Vago, Chairman of CLIA Europe, existing port infrastructure, homeporting challenges, continuous and unexpected price hikes for major onshore attractions are the main obstacles for the further development of the cruise sector in Greece.

“The industry needs competitive and a stable and efficient operating environment, but today the hurdles are there for all to see. I urge the Greek authorities to prioritize a port development programme with specific completion timelines and a viable and sustained funding streams.”

Vago also said that 6 million people took a cruise last year in Europe with one million of them coming from outside Europe making a significant contribution to the continent’s economy. He added that in 2013 the cruise industry contributed 40 billion Euro to Europe where 340, 000 people are employed by the sector.

According to Vago, direct cruise spending in Greece stands at 570 million Euro with a further 1.4 billion euro in indirect spending of which more than a third pay the wages for 11, 000 direct jobs.

George Gratsos, President Hellenic Chamber of Shipping reiterated the main issues stifling Greece’s growth prospects adding the lack of direct flight connections with the US as one of the top obstacles.

Larry Pimentel, President and CEO Azamara Club Cruises shared interesting findings and insights of a Boston Consulting Group study on the evolution of luxury as a driver for affluent consumer choice. Edie Rodriguez, President and CEO of Crystal Cruises stretched the importance of compelling story telling by harnessing the power of the Internet to cost effectively promote this region’s competitive advantages to big audiences in big cruise feeder markets such as North America.

Andreas Andreadis, President Greek Tourism Confederation, highlighted the importance of tourism for the Greek economy: “In 2014 tourism contributed Euro 14bn to local businesses across Greece but a possible Grexit will be the death knell of Greek tourism and that’s why we are asking the Greek Prime Minister to find a solution within the Eurozone. We will support the Greek government as long as VAT on tourism services is set between 8-10 per cent so we can remain competitive. We will accept an increase of a few points but we would not agree to exceed the ten points mark as this will heavily impact the tourism sector and the employment opportunities it creates. Just think that Greek marinas carry 23% VAT and Turkey has 0%.

“For 2015 we believe that we will welcome 25mn arrivals despite a recent drop but this number hinges on achieving an agreement with our creditors within the Eurozone. We hope to achieve 19bn in tourism receipts by 2021 but this requires 3.3bn in annual investments that will help tourism increase its annual GDP contribution by 9%.”

At the ensuing panel table, the speakers debated a range of issues from the impact of the economic recession and political developments on Europe’s cruise markets to the challenges posed by infrastructure deficiencies for Mega Cruise Ships.