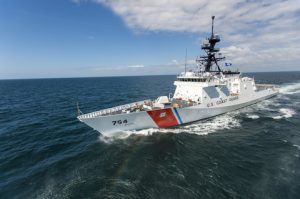 According to a recent U.S. Coast Guard announcement, four NSCs Bertholf, Waesche, Stratton and Hamilton, are fully operational and executing Coast Guard missions in the field. The fifth James, is scheduled for delivery and commissioning in 2015. The sixth cutter, Munro is expected to be delivered in 2016. Fabrication of the seventh NSC, Kimball, began earlier this year and delivery is scheduled for 2018.

All the LM2500 gas turbines for the NSC program were manufactured at GE’s Evendale, Ohio, facility.

Have you booked your place at global shipping’s biggest event?