Top Posts
COVID-19, plague, planets, conjunctions, comets, and the Chinese...
Don’t take chances where your health is concerned…
Vital statistics of results of the allaboutshipping 100...
The www.allaboutshipping.co.uk Top Women in Shipping for 2020
Dr. Marina Papaioannou
March, IWD2021 and other Events – WISTA UK
Where will I dock each night on my...
Stena Line aims to become the most diverse...
Raskin says US ready to lead in climate...
American Club Member Alert (March 5, 2021) re-...
GreenVoyage2050: States accelerate action to decarbonize shipping
On-Demand Recap: Leaning into the Future and the...
Life raft for missing fishing vessel Nicola Faith...
New global ISO-standard for ship-shore data exchange
Home HRArt and auctions In Conversation: a ‘Call and Response’ art exhibition by the NOHO collective of seven artists…
Art and auctionsEventsExhibitionsPaintings and Sculpture

In Conversation: a ‘Call and Response’ art exhibition by the NOHO collective of seven artists…

In Conversation: a ‘Call and Response’ art exhibition by the NOHO collective of seven artists at Seven Dials Club, Covent Garden,  By James Brewer

A group of artists who scarcely knew each other a year ago are now very much “in conversation” – producing outstanding and zestful new works as a result of responding to each others’ creativity.

The group has its origins in a meeting between two of the artists, Rod McIntosh and Fleur Deakin, during The Other Art Fair in London in spring 2014 and realising “there was a synergy between their practices, ” as they put it.

Thus was founded NOHO Artists, the name and notion stemming from the fact that members were working ‘not in Soho, ’ but on the periphery of the lively West End district. 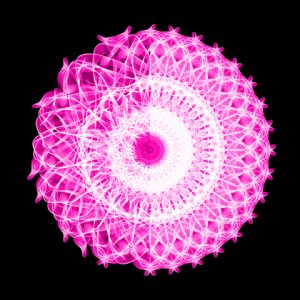 Now there are seven – and they are appropriately having their first collective show at Seven Dials Club, in Covent Garden and within a few paces of Soho. It is a venue much in touch with the diverse populace of the area – its activities range from art classes, to chair yoga, to pub quizzes, tango and blues music.

Many are called but few are chosen in the world of contemporary fine art, and the unique ‘call and response’ format adopted by the NOHO adherents fuels their dynamic of artistic enterprise and mutual encouragement.

The spirit of The Other Art Fair, a series of events designed to give independent artists the chance to show their work to the wider field of collectors and commercial galleries, unleashed a flow of camaraderie in which they could test their ideas and share their experiences.

For the new exhibition, the artists not only hang their works on the walls of the Seven Dials Club, but provide short texts explaining how their fellow practitioners inspired them. “These are our interpretations and beginnings of a deeper conversation with each other and our audience, ” said Rod McIntosh.

You Left a Heart on the Path. Four-part screen print on Somerset Satin paper. By Natalie Ryde.

In a statement, the group said: “At first glance the individual practices of the NOHO Artists may seem disparate but on closer consideration, there is common ground in the artists’ commitment to the formal qualities of their work, a dedication to their use of technique and materials and a desire to offer a generous window on their private motivations through engagement with other artists and the public.”

The process is based on showing a piece of original work to another artist from whom another work is sought in reply. The dialogues have voices, but punctuation and reflective silences too. Through this ‘conversation of art works’, many dialects are spoken but there is a common visual language and mutual understanding, says Rod McIntosh. This is quite different from the ‘sterile’ gallery context.

For instance, in the text accompanying her contributed work, Fleur Deakin says: “Urban Energy Systems [which she describes as a raw, expressive, mixed media composition] is my most abstract piece to date. I would not have attempted such an artistic leap had it not been for the collaboration and platform of NOHO Artists.”

She continued: “After many years of working in isolation in my studio it was refreshing to schedule regular meet-ups with Rod and discuss our individual practice and processes, work that really excited us, and we encouraged each other to explore, be brave and expand beyond our current practice.” 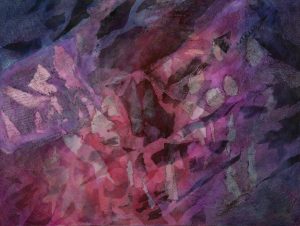 The Menu. Oil and mixed media on wood. By Hermione Carline.

In turn, Rod said: “My response to Urban Energy System is with a work [Peristallein V, 2015, Indian ink on mulberry paper] that explores the continuous energy within ourselves, the motion of peristalsis, as a starting point and embodies this within a single gesture.”

Rod says that his art documents analogue creation at a time of increasing reliance on digital mechanisms to assist communication and consumption, and offers a moment to reduce the click/swipe pace to a walk-by, or stop.

Blandine Bardeau shows an untitled collage and drawing on paper in response to Rod’s Indian ink drawing, “which encourages us to listen, observe and contemplate upon the in-between moments of our busy lives.” This was part of a series of collages made while she was without a studio space and was working at home with whatever tools were to hand (including nail varnish, paper cut-out, felt-tip pen and colour pencil).

“I feel that the sense of calligraphy and letting the materials speak for themselves connects with Rod’s work quite well.” 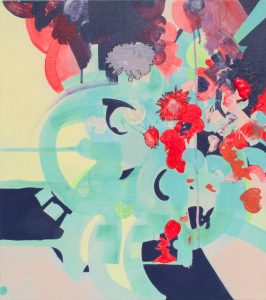 Blandine further shows an acrylic painting on linen,  Accident Grave de Fraises Néon which is in tune with her joyous, mixed-media approach to painting.

That prompted a study from Hermione Carline entitled The Menu, which is oil and collage on wood. “I love the playfulness and spontaneity of Blandine’s painting and her use of collaged shapes, ” commented Hermione. “I have chosen my painting The Menu to partner hers as I feel there is a connection with the rounded organic shapes we have both used and the process itself.

“The painting refers back to memories of evenings spent eating and drinking late into the night during a wonderful holiday in a remote corner of the Ardèche in southern France. The abstracted shapes represent figures, a laden table and the terrain itself.”

Natalie Ryde says of her screen-print You Left a Heart on the Path, “The blue seam running through the piece is a river tributary from a 1960s map of the San Moritz area. I have never been there; I found the map in a charity shop in the Lake District. I love the object in terms of its colour, detail and the stories it suggests rather than any practical purpose. The network of lines that grows out from the blue seam creates an undulating surface reminiscent of a woven fabric. The netted forms reference my own forgotten family skills as textile makers.”

The artist Frikkx says that the one-off giclée print from his Series of Strings and Circles III is about “how we get transformed over time to a state of love, trust and perfection and back again.” In each set of images the first is the perfect circle but those that follow are partly made up by the perfect circle and partly peeled away “like the journey that we are on.”

“The beautiful geometry and ethereal iridescence of Series of Strings and Circles III reminded me of the bioluminescent organisms that dwell in the depths of the oceans, simple structures eloquently providing solutions to biological needs that betray our common ancestry, ” says Benjamin Parker who was inspired to produce in response his  etching Unnatural Selection:. “The alteration of a singular form through repetition reinforced this idea of evolution.”

Sophie Roberts, fair manager of The Other Art Fair, has expressed her delight “that such an innovative collective as NOHO Artists has emerged directly from onsite conversations between exhibiting artists. The success of NOHO Artists is an example of this independent spirit: a collaboration between seven like-minded artists who share diverse yet complementary practices.”