Top Posts
COVID-19, plague, planets, conjunctions, comets, and the Chinese...
Don’t take chances where your health is concerned…
Vital statistics of results of the allaboutshipping 100...
The www.allaboutshipping.co.uk Top Women in Shipping for 2020
Dr. Marina Papaioannou
March, IWD2021 and other Events – WISTA UK
Where will I dock each night on my...
Stena Line aims to become the most diverse...
Raskin says US ready to lead in climate...
American Club Member Alert (March 5, 2021) re-...
GreenVoyage2050: States accelerate action to decarbonize shipping
On-Demand Recap: Leaning into the Future and the...
Life raft for missing fishing vessel Nicola Faith...
New global ISO-standard for ship-shore data exchange
Home Marine InsuranceHealth and Safety Vestdavit chosen for Mediterranean mercy rescue mission
Health and SafetyImmigrationMarine Equipment Products and ServicesSafety and SecuritySalvage, Towage, Wreck RemovalsTechnicalTechnology 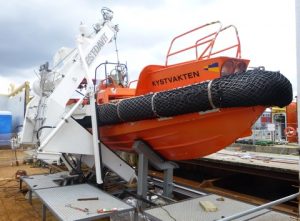 NORWAY-based boat handling system and specialised davit supplier Vestdavit has supplied a PLR-3600 FCR davit to the offshore vessel Siem Pilot, which is Norway’s official contribution to Operation Triton, the European mission to rescue African refugees in the Mediterranean.

Siem Pilot belongs to Siem Offshore and is normally used in offshore activities and North Sea rescue work. In normal configuration it has cabin space for 64 persons and a cargo deck of almost 1, 000 square meters. Following conversion it can take on board up to 500 refugees. The Vestdavit davit system which has been installed at short notice on the aft deck will allow the vessel to deploy two fast rescue craft, which are vital to finding and rescuing refugees.

Rolf Andreas Wigand, managing director, Vestdavit, says, “We are proud to supply the davits which will make the Siem Pilot an effective part of the mission to save thousands of refugees in the Mediterranean, and we are proud we could supply and fit the davit quickly so that the vessel can deploy without delay. Our davit will allow the ship to launch and recover boats in sea states which others cannot operate in, widening the operational window and giving them the capacity to carry out rescues from other small craft even in bad weather.”

For photos of the davit being installed go to http://bit.ly/1LNMINQ   or e mail john@merlinco.com

Vestdavit designs, supplies and supports tailor-made solutions for launching and recovering boats in difficult conditions at sea. Its range of boat handling systems and davits are the first choice of navies, coastguards, seismic survey operators, pilot authorities and offshore operators who need to be able to operate small boats safely from larger vessels. Since 1975 Bergen-based Vestdavit has supplied over 1, 900 davits and side and stern launch systems. They have proven themselves over more than 30 years use in the North Sea and other harsh environments around the world. Self-tensioning and shock absorbing systems ensure crew safety and widen the operational window for the users. Vestdavit’s key focus is on operational effectiveness, safety and the reliability of its equipment. www.vestdavit.no