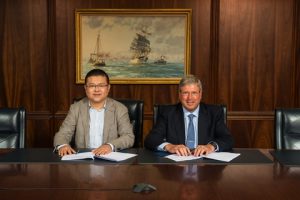 (Houston) ABS, a leading provider of marine and offshore classification services, has been selected by Baoham Offshore (HK) Ltd. to class a drilling semisubmersible and a liftboat.

“This award is a reflection of the solid reputation ABS has built as a classification society over more than 30 years in China, ” says ABS Executive Vice President of Energy Project Development Ken Richardson. “We are particularly excited about working with Baoham Offshore as an emerging Chinese company.”

According to Baoham Offshore General Manager Xu Jun, the company’s goal is to be a first mover in China. “We are not building on speculation. On top of our first 300-ft harsh-environment ABS-classed liftboat (GM-J1000) already under construction, the addition of these units extends our ambition of building a flexible fleet, ” he says. “We believe partnering with ABS will strengthen the foundation we are creating to build our fleet development program.” 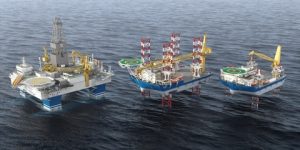 This artist’s rendering shows the three units that will make up the Baoham fleet upon delivery of the newbuilds now on order. (Image courtesy of Global Maritime)

The GM-4E mid-water semisubmersible drilling unit will have both an eight-point mooring system and Class 3 dynamic positioning and will feature a variable deck load that exceeds 4, 000 metric tons. The GM-J1450 has a water depth capability of 80 m (~260 ft) and will be equipped with a 400-metric-ton deck crane.

“We are pleased to continue our working partnership with Baoham Offshore, ” says Global Maritime Engineering Services Manager Mark Cooper, whose company provided the designs for an earlier unit as well as both of the contracted newbuilds. “We are excited to be introducing this flexible design on a groundbreaking project with not only an owner with a strong vision, but a very experienced class society.”

Singaporean engineering house Gulf Offshore will carry out detail engineering and production design. The liftboat will be built at the PaxOcean yard in Zhoushan, China. A yard has not yet been selected for the semisubmersible unit.

Hydraquip Custom Systems Inc., which has produced more than 100 jacking systems over the past two decades, will provide the jacking system for the liftboat, while Gulf Offshore Pte Ltd will provide detail engineering and production design.