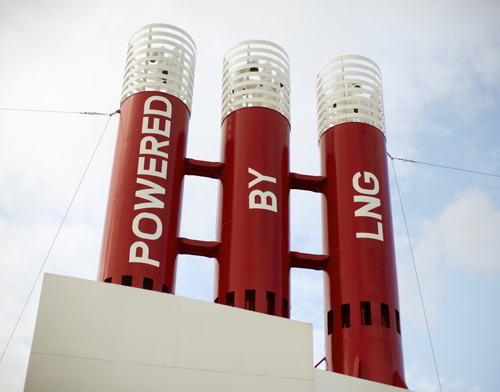 The IGF Code, which will become mandatory under amendments to SOLAS, aims to minimize the risk to the ship, its crew and the environment, having regard to the nature of the fuels involved. (Pic: FJORD LINE_ESPEN GEES)

The new mandatory code for ships fuelled by gases or other low-flashpoint fuels was adopted by IMO’s Maritime Safety Committee (MSC), when it met at the Organization’s London headquarters for its 95th session from 3 to 12 June 2015. The Committee also placed unsafe mixed migration by sea on its agenda and considered cyber security matters and passenger ship safety. It adopted new ships’ routeing measures and a number of circulars arising from items put forward by the sub-committees.

IGF Code adopted
The MSC adopted the International Code of Safety for Ships using Gases or other Low-flashpoint Fuels (IGF Code), along with amendments to make the Code mandatory under the International Convention for the Safety of Life at Sea (SOLAS).

The use of gas as fuel, particularly liquefied natural gas (LNG), has increased in recent years due to lower sulphur and particulate emissions than fuel oil or marine diesel oil. But gas and other low-flashpoint fuels pose their own set of safety challenges, which need to be properly managed. The IGF Code aims to minimize the risk to the ship, its crew and the environment, having regard to the nature of the fuels involved.

The amendments to SOLAS chapter II-1 (Construction – Structure, subdivision and stability, machinery and electrical installations), include amendments to Part F Alternative design and arrangements, to provide a methodology for alternative design and arrangements for machinery, electrical installations and low-flashpoint fuel storage and distribution systems; and a new Part G Ships using low-flashpoint fuels, to add new regulations to require ships constructed after the expected date of entry into force of 1 January 2017 to comply with the requirements of the IGF Code, together with related amendments to chapter II-2 and Appendix (Certificates).

The Code addresses all areas that need special consideration for the usage of low-flashpoint fuels, taking a goal-based approach, with goals and functional requirements specified for each section forming the basis for the design, construction and operation of ships using this type of fuel.

The MSC also adopted related amendments to the International Convention on Standards of Training, Certification and Watchkeeping for Seafarers (STCW), and STCW Code, to include new mandatory minimum requirements for the training and qualifications of masters, officers, ratings and other personnel on ships subject to the IGF Code. The amendments also have an entry into force date of 1 January 2017, in line with the SOLAS amendments related to the IGF Code.

Venting amendments adopted
The MSC adopted amendments to SOLAS regulations II-2/4.5 and II-2/11.6, clarifying the provisions related to the secondary means of venting cargo tanks in order to ensure adequate safety against over- and under-pressure in the event of a cargo tank isolation valve being damaged or inadvertently closed, and SOLAS regulation II-2/20 relating to performance of ventilation systems. The expected entry into force date is 1 January 2017.

IMSBC Code amendments adopted, guidance approved
Amendments to the International Maritime Solid Bulk Cargoes (IMSBC) Code were adopted. The amendments include those intended to improve the requirements relating to the provisions for concentrates or other cargoes which may liquefy; amendments to provisions for specially constructed cargo ships for confining cargo shift; the addition of new individual schedules such as iron ore fines, among others, and amendments to a number of existing ones, including a revised schedule for iron ore.

• MSC.1/Circ.1453/Rev.1 Guidelines for the submission of information and completion of the format for the properties of cargoes not listed in the International Maritime Solid Bulk Cargoes (IMSBC) Code and their conditions of carriage; and

• MSC.1/Circ.1454/Rev.1 Guidelines for developing and approving procedures for sampling, testing and controlling the moisture content for solid bulk cargoes which may liquefy.

To progress work on aspects of this humanitarian disaster that come under the purview of IMO, the Committee agreed to place an agenda item on its work programme.

The MSC also invited the Sub-Committee on Navigation, Communications and Search and Rescue (NCSR) to review the industry-developed guidance on “Large-scale rescue operations at sea: Guidance on ensuring the safety and security of seafarers and rescued persons”, with a view to promulgating it as an IMO circular.

The MSC forwarded a proposed revised reporting format for the joint databases on migrant incidents and on suspected smugglers and vessels being developed by IMO, the International Organization for Migration (IOM) and the United Nations Office on Drugs and Crime (UNODC), to the Facilitation Committee for its consideration.

Also approved were draft amendments to SOLAS regulation II-1/22 to clarify when watertight doors may be opened during a voyage (applicable to all ships).

The long-term action plan on passenger ship safety was updated, to include consideration of the inclusion of inclinometer measurements within all voyage data recorders; development of more detailed assessment criteria for recognizing manning agencies and development of guidelines on the appropriate assignment of trained crew to emergency duties; and development of guidelines for comprehensive risk assessment, passage planning and position monitoring; effective bridge resource management and to remove distractions.

Cyber security matters referred to MSC 96 and FAL 40
The MSC considered a number of submissions relating to cyber security, agreeing that it was an important and timely issue. The MSC noted that the shipping industry round table (including the Cruise Lines Industry Association (CLIA), was developing guidance on cyber security on board ships, to be submitted to the next Facilitation Committee (FAL 40) and MSC 96 in 2016. The Committee urged Member States and international organizations to collaborate on proposals for guidance on maritime cyber security and submit them to the next session.

Circular on definition of “high risk” piracy area agreed
An MSC Circular on Best Management Practices (BMP) for Protection against Somalia Based Piracy was approved, calling on the BMP authors to amend the coordinates of the  High Risk Area (HRA) in BMP 4 (promulgated as MSC.1/Circ.1339), following a proposal by Egypt to remove the Gulf of Suez and the Red Sea from the HRA definition. The circular notes that the HRA as defined in the BMP is susceptible to change based on changes in the actual threat circumstances. Currently, for the purpose of BMP, the HRA is set as “an area bounded by Suez and the Strait of Hormuz to the North, 10°S and 78°E”.

Ship-routeing measures adopted
The MSC adopted new ship-routeing measures aimed at protecting sensitive areas in the south-west Coral Sea off Australia, linked to a proposed extension of the Great Barrier Reef and Torres Strait Particularly Sensitive Sea Area (PSSA), including an “area to be avoided” (ATBA) and two new, five nautical mile wide, two-way routes. Five recommendatory ATBAs in the region of the Alaska Aleutian Islands were also adopted. The new measures will be implemented on 1 January 2016 at 0000 hours UTC.

Approval of amendments for future adoption
The MSC approved the following, for adoption at a future session:

• draft amendments to the STCW Convention and part A and B of the STCW Code related to revised training requirements for masters and deck officers on board ships operating in polar waters;
• draft amendments to chapter 8 of the International Code for Fire Safety Systems (FSS Code) regarding prevention of internal corrosion and clogging of sprinklers and draft new chapter 17 of the FSS Code, containing mandatory requirements for helicopter facility foam fire-fighting appliances.

Goal-based standards – work plan for further work on GBS-SLA agreed
The MSC approved a work plan for continued work on goal-based standards safety level approach (GBS-SLA), over the next three sessions. The outcome of the development of functional requirements for SOLAS chapter III (Life-saving appliances) by the Sub-Committee on Ship Systems and Equipment (SSE) will be considered. Progress was also made during the session on developing the draft interim guidelines for the application of the GBS-SLA, and the MSC invited Member Governments and international organizations to submit comments and proposals on them to the next session.

The MSC approved the MSC.1/Circ.1394/Rev.1 on the Generic guidelines for developing IMO goal-based standards. The revised generic guidelines specify structure and contents of functional requirements to be used in GBS and give examples. The guidelines also describe the process for the development, verification, and implementation and monitoring GBS to support regulatory development within IMO. GBS are defined as high-level standards and procedures that are to be met through regulations, rules and standards for ships. GBS are comprised of at least one goal, functional requirement(s) associated with that goal, and verification of conformity that rules/regulations meet the functional requirements including goals.

Guidelines and circulars approved
The MSC approved a number of circulars giving guidance and guidelines:

• Guidelines on Software Quality Assurance and Human Centred Design for e-navigation;
• amendments to update the long-range identification and tracking (LRIT) system performance standards and related circulars, to improve the functioning of the LRIT system;
• good practice guide for ECDIS;
• Revised design guidelines and operational recommendations for ventilation systems in ro-ro cargo spaces; and
• Amendments to the Revised guidelines for the maintenance and inspection of fire protection systems and appliances (MSC.1/Circ.1432).

IUU fishing – joint working group to meet in November
It was agreed that IMO will host the third meeting of the Joint FAO/IMO/ILO Ad Hoc Working Group on Illegal, Unregulated and Unreported (IUU) Fishing and Related Matters, at IMO Headquarters in London, from 16 to 18 November 2015.