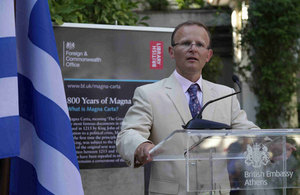 On Monday 15 June the British Embassy held a High Tea on the occasion of the 800th anniversary of the sealing of the Magna Carta.

On Monday 15 June (yesterday) the British Embassy held a High Tea on the occasion of the 800th anniversary of the sealing of the Magna Carta and put on display a framed and mounted facsimile of the document that it has acquired from the British Library. The facsimile is a reproduction of one of two original copies of the Magna Carta, held at the British Library. It has been produced by the Folio Society in such a way as to capture the appearance and feel of the original document.

The document has great significance to the UK and the USA, and over the autumn and into January 2016 the facsimile will be on temporary loan to the British schools in Athens, Athens College and the British Council. Schools will plan their activities heading up to the Magna Carta loan, in order to generate interesting discussions among students on the rule of law and the equality of all before the law.

Through the passage of history, the principles of Magna Carta were expanded, reinterpreted and exported – from England to Ireland, to northern France, to Wales, to Scotland, to the United States of America and across the British Empire. From Thomas Jefferson to the suffragettes and to Nelson Mandela, the Magna Carta inspired great men and great women in their struggles against arbitrary and despotic power.

As part of the Magna Carta anniversary celebrations, on Sunday 14 June, the Houses of Parliament in London invited the nation to ‘LiberTeas’. Communities across the UK took a moment to remember the Magna Carta and their freedoms and rights. They invited them to recall an historic event, or person that inspires them. Liberteas took many forms, from a picnic in the park to a Sunday lunch; a debate or a street party, as long as at 3.00 pm they served tea.