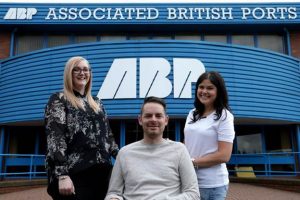 Now, the company’s fundraising efforts will be used to help former footballer Carl Giblin, who was diagnosed with Motor Neurone Disease (MND) in 2013.

A proportion of the funds will also be donated to SITraN, part of the Sheffield Motor Neurone Disorders Care and Research Centre, which offers multi-disciplinary care and support to patients and carers living with MND and is the facility which currently oversees Carl’s care.

He said: “MND is a cruel disease which seems to strike people in their prime. Carl’s name was put forward by one of our colleagues and his journey really struck a chord with us as one of our former colleagues, Nick Palmer, the former port director for Grimsby and Immingham, has also been diagnosed with the disease.

“It seemed right to concentrate our efforts on MND again, to help Carl obtain some of the equipment he needs, and to help fund research into this terrible condition. I know the staff here on the Humber will come up with a range of creative ways to raise money and they’ll put their all into fundraising like they did last year.”

MND is a terminal, degenerative condition that affects the Motor Neurones. It attacks the muscles until they waste away, leaving the sufferer trapped in their own body, unable to move, speak and eventually breathe.

Until his diagnosis in September 2013, Carl was fit and healthy and loved playing football every week. Now, he is quickly losing the ability to walk, his speech is deteriorating and he can no longer lift his arms.

Carl, who lives in Hull, is supported by his wife Amy and his extended family and friends, who work hard to fundraise as well as make his life as comfortable as possible.

He and Amy are grateful for the support of ABP and they’re looking forward to working with the company to help raise money for MND research and raise awareness of the condition.

He said: “”I was incredibly overwhelmed to find out I would be ABP’s nominated charity. I’m so grateful that not only will they be able to help me with things like an electric wheelchair, it also means that we can raise money for the Research Centre at Sheffield which is also vital in searching for the a cure.

“I know the awareness ABP will bring to the cause will also be fantastic and I am really looking forward to seeing what they have in store over the next few months!”

Professor Dame Pamela Shaw, SITraN Director said: “I am delighted that Associated British Ports has made SITraN its nominated charity. SITraN is an international centre of excellence for MND research.

“Our multidisciplinary team of scientists and clinicians combine all the key research skills and expertise under one roof to accelerate the development of new treatments and make them available to patients as quickly as possible. The support from organisations such as ABP makes a powerful difference by helping to fund specialist equipment, cutting-edge technologies and research programmes, and training the next generation of MND researchers.

“I would like to thank ABP for its generous support. By working together we can find new ways to improve the lives of MND patients, to better manage and eventually beat this cruel disease by developing effective treatments.”

Through its internal Charity Challenge Committee ABP has already set about the task of organising a raft of fundraising events to raise money for Carl and SITraN. Previous fundraising activities have included a Yorkshire Three Peaks Challenge, a celebrity dinner and auction, a golf day and an inter-port football tournament, as well a port open day which attracted more than 5000 visitors to the Port of Hull.

A member of the UK’s prestigious Russell Group of leading research-led institutions, Sheffield offers world-class teaching and research excellence across a wide range of disciplines. Unified by the power of discovery and understanding, staff and students at the university are committed to finding new ways to transform the world we live in.

In 2014 it was voted number one university in the UK for Student Satisfaction by Times Higher Education and in the last decade has won four Queen’s Anniversary Prizes in recognition of the outstanding contribution to the United Kingdom’s intellectual, economic, cultural and social life. Sheffield has five Nobel Prize winners among former staff and students and its alumni go on to hold positions of great responsibility and influence all over the world, making significant contributions in their chosen fields. Global research partners and clients include Boeing, Rolls-Royce, Unilever, AstraZeneca, Glaxo SmithKline, Siemens and Airbus, as well as many UK and overseas government agencies and charitable foundations.