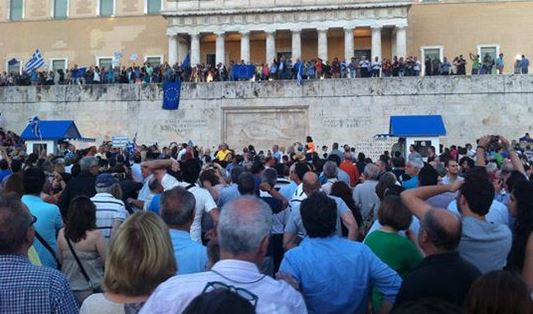 At last!!! Thousands of Greeks, basically Athenians, gathered tonight at Constitution Square to declare their support for their country to remain in the EURO and Europe.

It was an almost spontaneous demonstration, a very successful and peaceful one, favouring the conclusion of an agreement  – a just though agreement and avoid losing what two to three generations of Greeks have worked for.

A very impressive and above all, a much needed, a necessary demonstration with many women, an all-time record – that must surely mean something!

We have reports from many of our Allaboutshipping team, friends and relatives in Greece and can assure you this must be the beginning of something good to stop the “aspirations” of this lefty loony SYRIZA led coalition Government which, playing on time,  clearly wants to leave the EURO, the European Union and NATO; in a nutshell a regime change!

No to Stalinism in Greece – picture credits Steve Petrolekas

One friend said: “I was absolutely delighted by the cutting edge of some of the posters”.

This SYRIZA lead Government are determined to rock the boat, but rest assured, Greeks know well what to do when the going gets tough and how to rock these lot of jealous and envy “backed” leftists! Our European and Transatlantic friends and allies must intervene in any way they can to stop this despicable regime’s actions.

Having said that, we must also all work towards bringing into justice all those who embezzled money, governed by corruption both within and outside Greece over the last 41 years ; you dead well know what I mean!