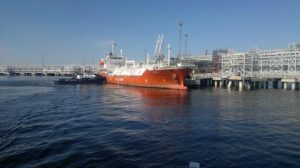 The sale of LPG terminal (Ust-Luga, Leningrad Region) owned by the Russian petrochemical holding SIBUR is at the “advanced” phase, Director General of SIBUR Dmitry Konov told IAA PortNews at the St. Petersburg International Economic Forum (SPIEF).
According to him, the Group hopes to complete the transaction in the nearest time. Dmitry Konov underlined that the guarantee of transshipment volumes for SIBUR is the obligatory condition of the sale.
He said the company had to build the terminal due to absence of similar terminals in the region and the sale was planned in the very beginning.
Director General of SIBUR also noted that the company is not going to invest in port infrastructure.
The terminal was launched in June 2013. Its design capacity is 4 mln t per year including 1.5 mln t of LPG and 2.5 mln t of light oil products. Investments into the project total RUB 25 bln.
SIBUR is a uniquely positioned gas processing and petrochemicals company with a business model focused on the integrated operation of its two core segments. SIBUR owns and operates Russia’s largest gas processing business in terms of associated petroleum gas processing volumes, according to IHS CERA and is a leader in the Russian petrochemicals industry. The Group has two operating and reportable segments: (1) feedstock and energy and (2) petrochemicals. The Group’s feedstock and energy segment comprises (i) gathering and processing of associated petroleum gas (APG) that the Group purchases from major Russian oil companies, (ii) transportation, fractionation and other processing of natural gas liquids (NGLs) that the Group produces internally or purchases from major Russian oil and gas companies, and (iii) marketing and sales of energy products, such as natural gas, liquefied petroleum gases (LPG), naphtha, raw NGL, methyl tertiary butyl ether (MTBE) and other fuels and fuel additives.
“Jo”
Dmitry KonovSIBURSPIEF
0 comment
0
FacebookTwitterLinkedinEmail