The “Normand Pacific” at Gibdock

Gibraltar-based ship repair company, Gibdock, has built up a close working relationship with Solstad Offshore, with a number of the Norwegian operator’s specialist offshore craft being repaired at the yard over the past few years. This partnership was recently rekindled when a Construction Support Vessel (CSV), the 5000dwt Normand Pacific, arrived in Gibraltar for its first special survey.

Gibdock managing director, Richard Beards, says, ”Solstad Offshore is a repeat customer that we hold in very high regard and we were delighted to welcome them back again. They are a quality operator and it is a positive reflection on our growing reputation within the offshore sector that they have chosen us to repair and maintain their vessels.”

The 122m long Normand Pacific,  which was built at the Fosen shipyard in Norway in 2010, entered the Gibdock yard in mid-May for a three week program of works, including two weeks in drydock and one week alongside. The vessel had been operating offshore West Africa, but was due to commence a new deployment offshore Mexico. Richard Beards says, ”Gibdock was ideally located to carry out the required special survey and pre-contract repair and maintenance work. Solstad Offshore was able to redeploy this valuable asset with limited deviation, and hence lower costs.” 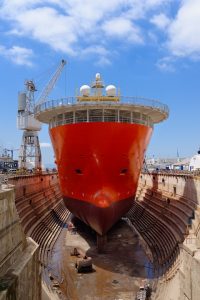 A key element of the drydocking works was the requirement to service Normand Pacific’s two Schottel propulsion thrusters which, in addition to three Brunvoll tunnel thrusters and a Brunvoll retractable azimuth thruster unit, were dismantled in the dock, and moved to the yard’s workshops for extensive overhaul work. Gibdock fitters assisted owner-arranged manufacturer technicians with the servicing of all six units.

In addition, Gibdock assisted MacGregor service engineers with the overhaul of the Normand Pacific’s 200 tonnes lift capacity offshore crane. Paul Cano, Gibdock ship repair manager, says, ”This was in many ways the most demanding aspect of the project, as it involved removing three out of the four hydraulic boom cylinders, each of which weighed 8 tonnes, and transporting them to the workshop, where they were stripped down and overhauled. We then returned them to the ship, lifted up the boom and refitted the cylinders in place,   while other works on the crane and surrounding area were ongoing.” When the crane was fully operational once more, Gibdock sub-contracted Water Weights to carry out a load test, to class requirements, using water bags.

The three-week stay of Normand Pacific at Gibdock also saw the yard carry out extensive pipework for various systems onboard, including the installation of 57m of new piping for new ballast water treatment technology. Additionally Gibdock fabricated and installed pipelines for the cooling system, and carried out a range of standard drydocking works, including external hull coating and overhauling the sea valves. The vessel’s lifeboats and davits were also tested and serviced during Normand Pacific’s stay in Gibraltar.

Paul Cano says, ”It was very pleasing to have been chosen to carry out the vessel’s first drydocking. We worked well with Solstad Offshore and the crew of the Normand Pacific to undertake an extensive scope of works in what was quite a demanding time frame.” In the event, Gibdock completed the job slightly ahead of schedule, ensuring the vessel was able to sail on to its next charter on time on June 10th.

Malcolm Rosie, technical director, Solstad, comments: “We were delighted to return to Gibdock with Normand Pacific,  after a gap of several years since we were last in this region for drydocking. We were very pleased with the outcome and would have no hesitation returning to Gibdock in the future.”

Crowley to add sailings from North Atlantic to Puerto Rico