Who can stand the truth? 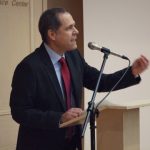 By the end of this week, or at most by the end of this month, the scam of the so-called “restoration of democracy”, the  period that followed the years of the dictatorship of the junta in Greece, is collapsing with a bang. It was the notion that a country of public employees, pensioners and  consumers can survive and prosper in the modern world. However, despite the obvious bankrupt model of clientelism, no party in Parliament dares to talk about the real issues. All of them, without exception, limit themselves to meaningless and harmless wishful thinking: “may a solution be found that will neither inconvenience us nor separate us from our European family”… Well, such a solution does not exist! Both cannot be done! Thanos Tzimeros writes…

The taxpayer pays every year 1, 114, 000, 000 Euros towards the support of the pensioners of OTE (the telephone company) & DEH (the public power company) and 1, 500, 000, 000 Euros for pensions to people younger than 55. There can be no logical argument to justify the retirement of public employees years earlier than employees  of the private sector, as proposed by the Greek Government in the notorious 47-page paper submitted to the Troika/Institutions. There can be no logical argument to explain why an unemployed person , that happens to own a house, must pay taxes towards the so-called “supplementary funds”, the thoroughbreds of the client state that operated like pyramid schemes at the expense of future generations. There can be no logical argument to convince the Italian, the Slovak, even the “rich” German taxpayer, to pay for the make-believe employment of the clients of the Government Minister ” of the 12%”, the Minister that, as a lawyer, had entered into agreements to arrange for the re-hiring of dismissed public workers against a fee of 12% of their annual pay.

Because there can be no logical arguments, the Government is resorting to a crass and shameless blackmail: if you do not lend us, we will blow up the fort and burn you all with us! This threat, unheard of from a European State, even if not carried out, has already destroyed every possible trust between Greece and its partners; between Greece and the rest of the World. It has made us the laughingstock of the universe, a terrorist state, which the other people face sometimes with pity, sometimes with irony, sometimes with disdain, sometimes with anger. But never with respect.

The moment of truth has arrived. The solution cannot be the overtaxing of those that survived the slaughter of the private sector, as implemented by the previous Government, and which will be completed under worse conditions by the present Government. The solution is an agreement to apply shock therapy to the sick man of Greece, the State. But that would hit the core of clientelism. The Governments of Papandreou and Samaras did not dare to tackle it, the Tsipras Government refuses to discuss it, and the newly elected reformists keep referring to Europe, but ignore its values.

Who dares to say openly that reform means:

– Opening of the market by eliminating the so-called “closed professions”, which will bring lower prices to the consumers, but which will reduce the revenues and profits of strong unions and corporatives.

– Shutting down the counterproductive parts of the State with the elimination of  jobs and firing of the make-believe workers.

– The modernization of the productive parts of the State with only one criterion, the “cost benefit ratio”, which will result in the firing of thousands of unskilled “seal keepers”, but also the hiring of scores of highly skilled  individuals,  for example IT specialists (who may be preparing to emigrate).

– Simplification of the laws and tax rules, which will leave without work thousands of lawyers, notaries, tax specialists, etc., who will need to change professions.

– Changes in the licensing system that will leave without bribes hundreds of thousands of rodents in the public and private sectors.

– Changes in the laws regarding the functioning of the political parties, which will cut drastically their financing by the State, and put in question the viability of old-fashioned traditional parties with huge bank debts.

– Changes in our laws regarding elections that will prevent minority parties (that were rejected by two-thirds of the electorate) to claim a mandate of the Greek people, and wreck the country.

These and many others, which are unpleasant to the party legions, are real reforms. They were never made because they are a menace to statism and all its parliamentary forms. But the lies are finished. The party with borrowed money  is over. This summer will be the hottest of our contemporary history; a real foundry, from which will flow the new and noble “metal” of the new Greece, of the Greece that will be proud for its achievements with its own forces.