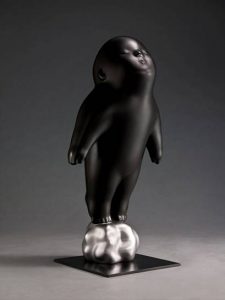 London has enjoyed a close-up chance to appreciate the work of sculptor Li Chen, work which seems at home wherever it is on display. So far that has included historic settings in Italy, the Place Vendôme in Paris and outdoors in Singapore.

The remarkable artist has been ranked  sixth in the list of top sculptors globally by a French art website, Artprice.

Taiwan-born Li Chen says: “I am not making sculpture. I am creating happiness, something to be enjoyed.” His sturdy pieces of bronze, lacquered over with black, were on show in May at the huge contemporary fair Art15 in Olympia thanks to the influential Asia Art Center, which has a defining presence in the wealthy art capitals of the Far East.

Solid and weighty as these works are, there is nothing forbidding or confrontational about them. Instead, they raise spiritual and philosophical enquiry about human existence and its purpose.

Entering the World. By Li Chen.

Jessica Lee, the enthusiastic Hong Kong representative and manager of international projects for Taipei-based Asia Arts Center, gave spectators visiting the capacious Stand B2 at the fair an insight into Li Chen’s application of western technique to eastern traditions and philosophy.

A prime work highlighted by Ms Lee was his Entering the World (2007) with which Li Chen explores the fundamental meaning of life and death.

The author depicts Buddha cradling a golden child alluding “to the fact that reincarnation is cosmic physics, that the variables of life and death that play such an important role in our lives and all worldly phenomena are determined by fate, ” the gallery says. “In contrast to the serious and gentle disposition of the Bodhisattva, Li Chen purposefully highlights the importance of ‘entering the world and existing.’

“Although life continues throughout the universe, birth has its own unique value, which is why an innocent child represents the highest plane of human pursuit.” As the playful babe waves its arms and legs while embraced by the solemn Bodhisattva, the two represent a contrast of ‘fate’ and ‘entering the world.’ In Sky (2012), the artist again shows his mastery over the interplay of objects of different sizes. An idealized person is shown “roaming across the cloud, his arms spread out like wings, facing upward and with eyes closed, as if pursuing a perfectly sublime realm beyond horizon.” The cloud is a cute silvery cotton wool-like ball, but appears to bear the character as safely through the heavens as though he were on skates or skis.

The aim, we are told, is to convey a sense of yearning, as whenever we remember a lost loved one, minds and emotions become pure and clear. The story is told that while visiting his brother’s newborn child, the artist was struck by similarities between the baby and his own father. “At that moment, he seemed to witness the spiritual strength of longing in reincarnations.” 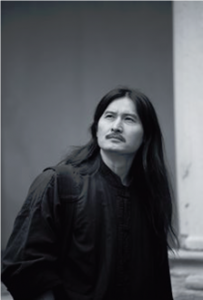 This is all in line with Li Chen’s insistence that the excesses of materialism, and indifference to the necessity of balance and harmony in everyday life, have prompted people to yearn for a spiritual space and belief.

Peng Feng, curator of the Chinese Pavilion at the Venice Biennale in 2011, shrewdly identified Li Chen’s approach when he spoke of “the way in which he builds on rather than seeks to deconstruct cultural heritage. In other words, he demonstrates a respect for the spirit of culture rather than satirising it, and gives proper attention to detail and beauty rather than disregarding them.”

Jo-Anne Birnie Danzker, director of Frye Art Museum, Seattle, has said that in addition to composition of Eastern traditions and Western sculptural language he has “an ongoing dialogue with the spiritual and material cultures of Africa and Oceania. This can be recognised in certain re-constitutions of Li Chen’s sculptural bodies and in his co-joining of the abstract and the figural in a manner that is quite distinct from that within the Chinese ink painting tradition on which Li draws heavily for his inspiration.”

Working in the Taiwanese seaport city of Taichung and in Shanghai, Li Chen has developed a style which, says his Asia Art Center biography, has “liberated itself from the confines of tradition by incorporating feelings of self-mindfulness and interpretations of Chinese classics from the Buddhist and Taoist traditions, blended with contemporary thought, evincing a remarkably refreshing and natural effect of appearing both heavy and light. His work aspires to a spiritual arts therapy, uncovering a wealth of joy amidst the simple pleasures of life, innovating a spiritual space through the pieces, as humour embellishes a metaphorical engagement with the world.” 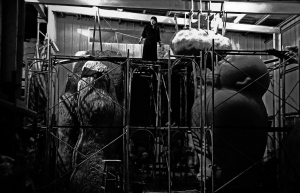 Li Chen had early training in contemporary western sculpture technique but later devoted himself to working on traditional Buddha statuary. He made his artwork debut in Taipei in 1999, and the following year started a world tour. He had a solo exhibition at the Venice Biennale in 2007, and soon afterwards was recognised by the National Art Museum of China, in Beijing; in 2009, Singapore Art Museum welcomed him for his first solo outdoor sculpture exhibition. An outdoor exhibition in the grand  Place Vendôme in Paris in 2013 drew widespread media coverage.

Asia Art Center was founded in 1982 in Taipei. Its management says: “As one of the leading galleries in Asia, we believe that a unique artistic vocabulary can be informed through returning to the womb of our artistic heritage, which we perceive as an emerging art trend in the 21st century.”

The gallery is proud that in 2013, Discovery Channel’s Chineseness programme “took viewers from over 30 countries deep into the minds and lives of our represented artists, enthralling audiences worldwide.”

Asia Art Center has premises at the 798 Art District in Beijing, which is in an old Bauhaus-style factory of 1, 100 sq m. Its headquarters in Taipei occupies 1, 000 sq m, and a second branch in the capital has high-ceilinged facility for contemporary art installations. The company’s offices in Paris, Venice, Singapore, and Hong Kong “enhance communication and connection with the global arts.”

Further information is at www.asiaartcenter.org