A view from the race – picture credits Yannis Mitsopoulos

The biggest Classic Yacht Race in Greece was organized by the Yacht Club of Greece between 18-21 June 2015, with a record participation and spectacular races at the “Bogazi” in Spetses, with a view of the imposing building of the Poseidonion Grand Hotel and with the support of  Spetses Yacht Club.

75 yachts, divided into three categories (classic boats, schooners and lateens) participated in a 3-day unique race.  For the first time in the history of the race the number of participants in the classic boats category exceeded that of all the others. A day earlier than the official start of the Spetses Classic Yacht Regatta 2015 gave pairs of boats the opportunity to compete in a fun race, the so-called Challenge Race that also acted as a training session. Beautiful classic boats travelled from every corner of Greece, such as Corfu, Syros, Crete, Paros, as well as from abroad, travelling all the way from France, Italy and Cyprus.

Among the participating boats was the imposing Aello,  skippered by Stefanos Chandakas which belongs to the founder of the Yacht Club of Greece, Antonis Benakis and took part in the race for the first time. Furthermore, Nikos Lykiardopoulos’ Savannah came all the way from Great Britain in order to defend her last year’s title. The fortunate spectators had the opportunity to watch the races at a close distance from the sea, which is what makes Spetses a unique race arena!

The schooner and lateen categories were highly competitive and at the same time very important, since they promote the Greek seamanship and tradition in the art of wooden shipbuilding. 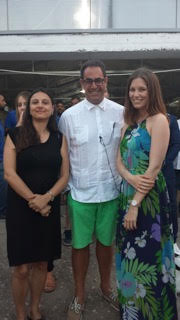 During the Award Ceremony at the Poseidonion Square, the President of the Yacht Club of Greece,  Alexandros Papadoggonas talked about the innovations that have been introduced this year: “During those five years of perseverance, hard work and constant development, we have managed to integrate the Spetses Classic Yacht Regatta in the international calendar of the Mediterranean, attracting a record number of participants (those from abroad more than doubled)!”  For his part, the President of the SCYR and Vice President of the Yacht Club of Greece, Nontas Lampadarios,  noted: “Remaining true to the values of the Yacht Club of Greece, we systematically work throughout the year in order to establish the race as one of the most well-organized and important races in the Mediterranean, with visible benefits for the country and the marine tourism industry.”

The greatest moment of the ceremony was the award of the priceless Spirit of Chivalry – Chivas Honour Award Spetses Classic Yacht Regatta 2015 by the Golden Sponsor of the SCYR Chivas Regal and the CEO of Pernod Ricard Hellas,  Christophe Lemarié to the lateen Alexandra X and its World Champions crew Takis Mantis- Pavlos Kagialis,  who represent in the best possible way the values of team spirit, sportsmanship and authenticity during the Spetses Classic Yacht Regatta 2015.

Each and every one of the speakers thanked the Sponsors of the Race. Among them was the Silver Sponsor of the race,  Berenberg,  which this year is celebrating 425 years of history. It was founded in Hamburg in 1590 and is one of the leading private banks in Europe, with 1250 executives and 19 offices around the world. Following the award ceremony of the 2nd day that took place at the ship sheds of the Yacht Club of Spetses,  Berenberg organized a delightful Pasta Party for all the crew members, who enjoyed tasty pasta recipes from Melissa at the Anargyrios & Korgialenios School of Spetses.

During the award ceremony, the President of the Yacht Club of Spetses and CEO of the Poseidonion Grand Hotel, Grand Supporter of the race, Mr. Andonis Vordonis handed the prestigious Concours d’Elegance awards to the most well- preserved and authentic boats. In the Classic boats category the award was given to Aello. In fact the Official Timekeeper of the race, the Swiss watch manufacturers of haute horlogerie,  IWC Schlaffhausen with the renewed series,  Portugieser,  gave Aello an impressive design of Portofino Chronograph! 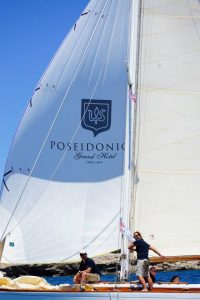 …and the “Poseidonion” in full force…!

In the schooner category the Concours d’Elegance award was handed to Panagia Tinou skippered by K. Nikas and in the lateen category to P. Chasapis, skipper of Chrysopigi.

Alexandra Tsoukala,  handed the unique Best Crew Appearance Awards to the crew of Baccara that participated in the classic boats category, to the crew members of Notios Anemos and Stratis – they drew – in the schooners category and Alexandra X in the lateen category.

The luxury hotels Amanzoe Resort and Nikki Beach Resort & Spa which hosted a kick-off party for SCYR 2015 on its amazing Pearl Rooftop and Technohull, a leading company in the field of speedboats, specializing in inflatable boats, offered an impressive inflatable for the needs of the race,  EPSA,  which offered refreshing soft drinks in collectible bottles for the 90 year anniversary of the company, as well as the high-protection sun-creams, offered by La Roche-Posay were the valuable Supporters of the Spetses Classic Yacht Regatta 2015.

The Prize Supporter of the race was “E. Athiniotakis, Spetses’ Store”.

The contributors of the race were the Foundation of Anargyrios & Korgialenios School of Spetses, the Spetses Trade Association, the Bouboulina’s Museum and the Traditional Boat Association of Greece.

The results, the unique photos as well as information about this year’s race can be found on Spetsesclassicregatta.com and on the Facebook page Spetses Classic Regatta!

The attention now shifts to the 3rd and final stop of the innovative Hellenic Classic & Traditional Boat.  Τhe Classic Boat Race will take place next weekend in Syros, the capital of Cyclades.

Communication Lab and Dr Marina-Lyda Coutarelli are in charge of the PR and Media Relations as well as the Sponsorship management of SCYR for the 5th consecutive year.