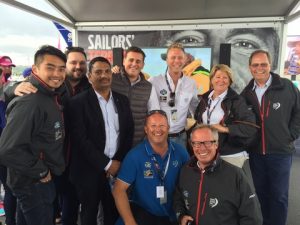 Gothenburg, Sweden – 24 June 2015: With the Volvo Ocean Race fleet now safely in Gothenburg, official logistics provider GAC Pindar is celebrating the successful completion of its own unique round the world challenge.

Logistics planning for the Volvo Ocean Race began over a year in advance, with GAC and GAC Pindar employees travelling over 30, 000 miles to reach each of the host ports to get an insight into the specific challenges that each would present. Since then, the GAC Pindar team has clocked up over 21, 000 work hours to ensure the successful completion of the logistics task. This involved the arrival and departure at 11 host ports, the issue of over 100 ATA Carnets for import and export customs and the storage of over $2, 500, 000 worth of spare boat parts at three locations around the world – Auckland, Dubai and Rotterdam – which had to be available for deployment at a moment’s notice.

Seven teams competed in the Volvo Ocean Race, which spanned 11 host ports on five continents, presenting GAC with a wealth of issues to deal with.

GAC Pindar played a key role in getting the Dongfeng Race Team back in the race after their mast broke during the fifth leg on 30 March, over 2000 nautical miles from the next stopover in Itajaί, Brazil. GAC Pindar had just 20 days to deliver the 28.6 metre, $345, 000 dollar mast to Itajaί in time for the team to fit it in time for the start of the next leg of the race to Newport, Rhode Island.

Emergency delivery was arranged from GAC storage in Dubai to Amsterdam and then to Sao Paulo by a specially designed Boeing 747 cargo aircraft. The mast was then transported to Itajaί by an over-sized truck, arriving two days ahead of schedule, allowing the Dongfeng Race team to re-join the race and maintain their podium position in the overall leaderboard.

GAC Pindar was also instrumental in the return of Team Vestas Wind to the race in Lisbon, after they ran aground on the Cargados Carajos Shoals in Mauritius. This set in motion a monumental recovery operation involving multiple parties across the world with GAC Pindar at the core.

Initially, the Team Vestas Wind workshop containers that follow the team around the world were redirected to Genoa in Italy. Then, transportation and customs clearance of what was salvaged from the reef was arranged to Genoa. Once the boat arrived, GAC Pindar Technical Manager Ollie Smith was at hand to oversee clearance for the vessel and organise the transfer to Persico Marine boatyard in Bergamo, where the boat was re-built.

GAC did not just have issues with the boats to contend with. Each host ports presented their own unique set of challenges to overcome to make sure the Race Villages were set up and ready for the race stopover. To meet the tight deadlines involved, GAC Pindar arranged for two identical Race Villages to leap-frog each other around the world ahead of the boats.

The Sanya stopover presented GAC Pindar with a particularly difficult logistics task. The port’s location meant that a total of five modes of transport were required to transport the Race Village from Cape Town in time – aeroplanes, container ships, ferries, trucks, and a specially chartered barge.

The two container ships could only go as far as Hong Kong, and a barge was chartered to make the 60-hour trip down to Hainan Island on the southernmost tip of China. Truck bans from 6.30am to 9.30pm on Hanain Island further complicated efforts to transport the Race Village to its final location.

And when the time came to leave Sanya to Itajaί, 112 containers were shipped to Vietnam, then onto Malaysia and finally to the Brazilian port. Further, 16 air freight containers had to be flown to Sao Paulo and trucked the 500 miles to the Race Village site to meet the immovable deadline.

While the distances between stopovers drastically reduced once the race reached Europe, the logistics challenge didn’t get any easier for GAC Pindar, as the focus shifted to staying ahead of the race boats themselves, to ensure everything was ready before their arrival. No air freight was possible once in Europe, so vast amounts of equipment had to be moved by road. The transfer of the race village from Lisbon to Lorient was particularly difficult, requiring triple manned trucks to travel 900 miles in just 26 hours to meet the tight deadline.

GAC’s Gothenburg born and bred Group President Bengt Ekstrand says: “The end of the Volvo Ocean Race is both a triumph for the seven competing teams and its organisers, and a true testimony to the power of GAC, its partners and our global reach and resources. GAC Pindar worked tirelessly with GAC employees at each venue to ensure the delivery of everything needed, regardless of the challenges that arose. Watching the boats sail into Gothenburg was a proud moment for everyone involved.”

Tom Touber, the Volvo Ocean Race‘s Chief Operating Officer, added: “Now that we are at the end, all of us at the Volvo Ocean Race would like to thank the GAC Pindar team. As our Race is life at the extreme we are always confronted with the unexpected. In those circumstances it is vital to have a logistical partner that is not only able to stick to their promise, but also able to change the promise swiftly and deliver the new one. Working with the professionals at GAC Pindar was a very good experience and a solid basis for mutual trust has been built between our operations team and the GAC Pindar logistics team. And if we have learned one lesson that is that the people we have worked with at GAC Pindar have made the difference.”